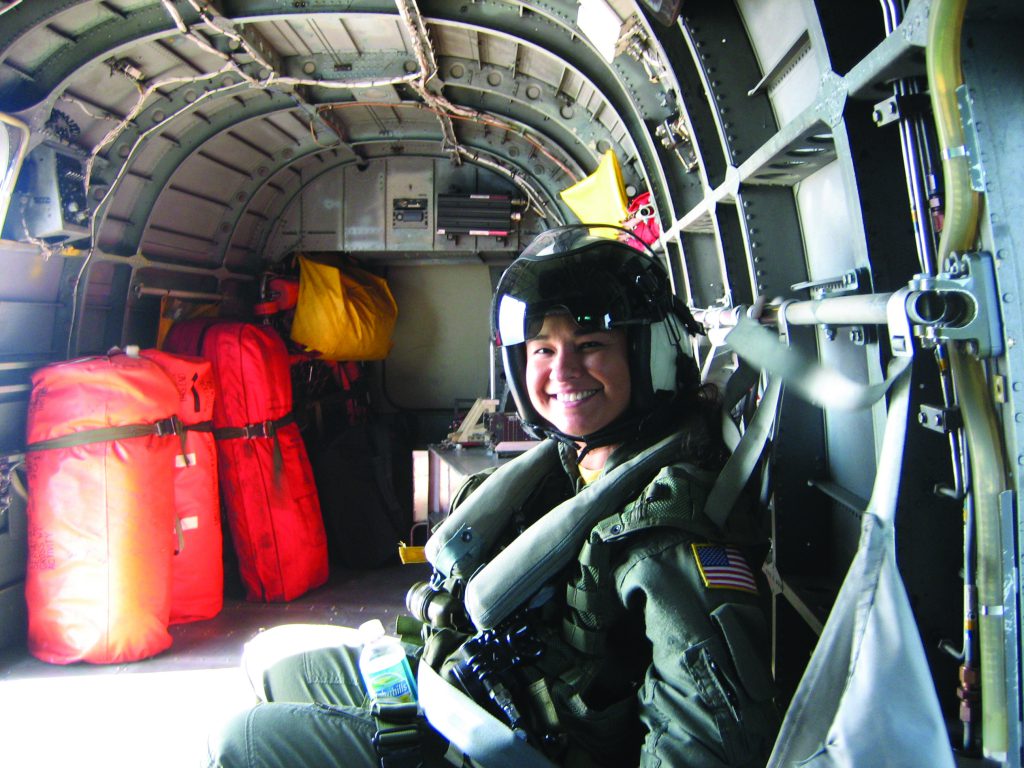 Not many psychological scientists can say they’ve undergone extensive flight training, but Tatana Olson can. A Lieutenant Commander serving in the US Navy Medical Service Corps, Olson received that training to earn her “Wings of Gold” as an Aerospace Experimental Psychologist, or AEP. She and her fellow AEPs have found that their training gives them a strong standing within the Naval aviation community.

“One of the unique characteristics that psychological scientists like AEPs bring to the military is the element of credibility,” Olson says of her experience. “We actually have to go through aviation training, where we fly in the same aircraft as Student Naval Aviators and experience many of the same challenges. Because of that, we have enhanced credibility in their eyes. They don’t just see us as academics detached from the real world.”

Olson, who got her PhD in industrial–organizational psychology from Purdue University, works in a community of 30 interdisciplinary psychological scientists whose main objective is to support Navy and Marine Corps aviation. The community includes cognitive, experimental, and social psychologists, as well as neuroscientists who work in areas such as program management, research oversight, and policy development. Their duties include:

And each of these psychological scientists will likely work in most, if not all, of those areas throughout their careers: “Since we’re military members, we change jobs every 3 years,” Olson explains. “But while our specific jobs may change, ultimately everything we do is in support of the Navy and Marine Corps.”

Olson says it can be challenging to complete an entire project during a 3-year assignment, “which makes collaboration with my colleagues especially important, so the work can continue after I have moved on. We’re also expected to work across a diverse range of assignments, so I may not always be working within my specific area of expertise.” But, she adds, “this also allows me to gain experience in other areas and expand my psychology ‘toolbox.’”

Olson says what makes AEPs successful across a wide range of assignments is “a strong research background and the ability to apply general psychological principles to any of the work that we do. There is a wide applicability across the range of jobs that we do for those types of skills.”

An example of this applicability, Olson says, involves the Navy’s transition toward increased use of unmanned aircraft systems (UASs). The existing model for UAS operator selection is to simply use trained aviators. However, as psychological scientists, Olson and her colleagues can ask questions about the important differences between manned and unmanned aviation; whether those differences require separate knowledge, skills, and abilities between pilots and UAS operators; and, if so, how to effectively measure those capacities.

“I am currently working on a project with the Office of Naval Research to help answer these questions, which leads to one of the most important things we bring to the table — an understanding of the importance of being able to support our proposed solutions with empirical evidence,” Olson said.

The work of psychological scientists in the military is particularly important when it influences people’s lives outside the lab. Olson recalls her role in 2010 as an advisor on the Comprehensive Review Working Group, a team tasked by the Secretary of Defense to assess the potential impacts of a repeal of the “Don’t Ask, Don’t Tell” law on the military.

“I was asked to be a part of this group because I was a social scientist and understood many of the key issues the group would be tackling, such as group cohesion, trust, leadership, and the relationship between attitudes and behaviors,” she said. “In the end, a decision was made to repeal the law. This, and the policy changes that resulted, were greatly informed by the Working Group’s research findings. This is how policy development should work.”

While many psychological scientists don’t have the resources or time to both conduct research and make sure it is disseminated and applied outside the lab, the military setting is optimal for bridging that gap, Olson said.

“It helps to be actually immersed in the [community] you’re applying the research in,” she adds. “It provides unique contextual perspective that helps to inform where solutions are needed that research can help to provide.”

In fact, Olson strongly recommends that recently graduated psychological scientists — or those looking for a change of pace — consider pursuing a career in the military.

“When people are considering a career in psychology, they don’t often think of the military,” she explains. “But it’s really a population and environment that is ripe for the skills and knowledge psychologists bring because you’re dealing with human cognition and behavior in some of the most diverse, physically and mentally demanding work environments in the world. I have the opportunity to develop real-world solutions to help my fellow military members and serve my country. There’s nothing more fulfilling than that.” 

Approved for public release; distribution is unlimited. The views expressed herein are those of the authors and do not necessarily reflect the official position of the Department of Defense or its components.

Wonderful discussion about our community and who AEPs work for!

In my upcoming book, America’s Oldest Professions: Warring and Spying (hard doc copy available free on request), I write about America’s two chronic habits that began with her birth and continues unabated nearly 240 years later. In a chapter titled, The Habit Helpers, I mention among many categories of them the hard and soft sciences, including in the latter examples from anthropology and psychology.

I am probably the only Fellow and member of APS to say this, but it seems to me this article of yours is like boasting about your Faustian deal with the political/military/intelligence/industrial Devil.

In my last chapter I depict five dismal to disastrous scenarios for America’s future if she doesn’t break those habits. Where will APS stand when we get closer to those scenarios?

This commentary is not meant to cast aspersion on Ms Olson. I was once like her many years ago, but not affiliated with the military side of government. I wish her well and hope that someday she comes around to my way of thinking.

Excellent article, but was surprised to see that you failed to mention that LCdr. Olsen was but one of many women who fill the position of Aerospace Experimental Psychologists, that was started in 1966 when Ens. Gale Ann Gordon, MSC, USNR became the first women to solo in a NAVY trainer and then the first woman to graduate from the Navy’s AEP program.

APS Fellow Dave Sbarra takes over at the helm on January 1.

CASBS is now accepting applications for its 2022-23 residential fellowships.