Observer > 2022 > May/June > Constellations Across Cultures: How Our Visual Systems Pick Out Patterns in the Night Sky 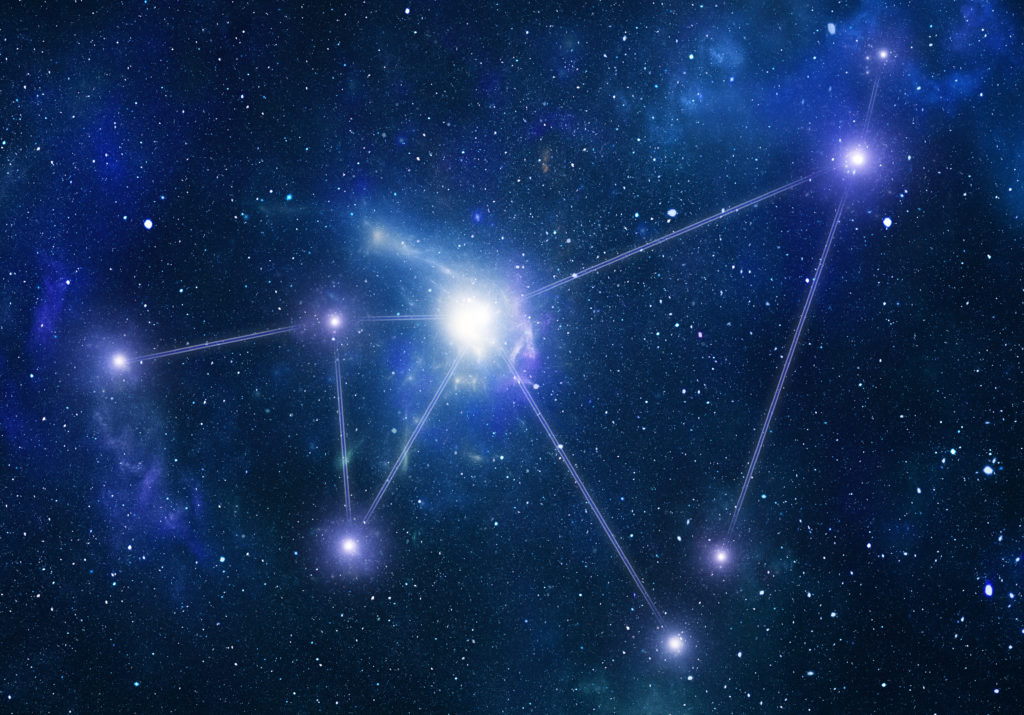 There are hundreds of billions of stars in our galaxy, though only about 5,000 are visible to the naked eye. Under ideal conditions and far from city lights, you can see about half of them on any given night.

Since humans are pattern-seeking animals, peoples across many cultures and eras have imagined that certain stars formed discrete shapes and patterns that held special meaning within their cultural traditions. Modern astronomy revealed that some of these patterns are actual star clusters—sibling stars born in the same stellar nurseries. Others are merely apparent groupings of stars that happen to cluster together along our line of sight.

Today, we officially recognize 88 constellations, as determined by the International Astronomical Union. These formalized groupings—whose names were drawn from mostly Middle Eastern, Greek, and Roman cultures—help scientists and amateur astronomers carve up the celestial sphere into recognizable chunks to better locate relatively nearby and deep-space objects.

Beyond our modern recognized constellations, various cultures throughout history have informally grouped stars together into patterns called asterisms. Evidence suggests that this practice goes back at least 17,000 years, when Paleolithic humans in what is now southern France painted depictions of what could be the Pleiades and Orion’s Belt.

These and many other constellations and asterisms have long been thought to be arbitrarily shaped by culture-specific knowledge. In his 1981 book, At the Crossroads of the Earth and the Sky: An Andean Cosmology, Gary Urton wrote: “Almost every culture seems to have recognized a few of the same celestial groupings (e.g., the tight cluster of the Pleiades, the V of the Hyades, the straight line of the belt of Orion), but the large constellation shapes of European astronomy and astrology simply are not universally recognized; the shapes were projected onto the stars because the shapes were important objects or characters in the Western religious, mythological, and calendrical tradition.”

New research published in the journal Psychological Science, however, suggests there is more to the story than matching mythological figures to patterns in the night sky. According to the findings, cross-cultural similarities in asterisms may have more to do with human visual processing than a cultural need to align stories and myths with the cosmos.

“Though ancient and modern cultures adopted different names and stories for asterisms, more than a few asterisms are recognized across multiple cultures,” said Charles Kemp, a researcher at the University of Melbourne and lead author on the paper. “We learned that basic aspects of our vision system may explain more about constellations across cultures than previously recognized.”

According to Kemp, psychologists and astronomers have previously noted that a handful of groupings jump out to almost anyone who looks at the sky, including the Pleiades (also known as the Seven Sisters and familiar as the Subaru logo) and the Big Dipper (also known as the Plough or the Wagon). “We aimed to go beyond this small set of near-universal asterisms and to characterize the long tail of asterisms that are not universal but are found across multiple cultures,” said Kemp.

He and his collaborators did so by cataloging constellations and asterisms from 27 cultures to determine which groupings recurred most frequently. These cultures spanned six major regions—Asia, Australia, Europe, North and South America, and Oceania—and included oral cultures such as the Inuit and literate cultures such as the ancient Chinese. The researchers found that the list of recurring asterisms extends beyond familiar examples such as Orion and the Southern Cross. It also includes less prominent asterisms such as the Corona Borealis (Northern Crown) and Delphinus (Dolphin).

The researchers then employed a computational model to capture how humans group stars into constellations. They focused on two basic principles: that bright objects are salient and that people naturally group nearby elements.

“These are two among a broader set of principles discussed by psychologists who study perception,” said Kemp. “For example, one additional principle is that symmetric groupings tend to be noticed.”

Observer > 2022 > May/June > Constellations Across Cultures: How Our Visual Systems Pick Out Patterns in the Night Sky

P is for Problem, Publish, and Psychology: Multilingual Scholars and the Challenges of Publishing in English

Two Filipina researchers advocate for broader representation in academic psychology and outline considerations for others whose first language is not English.