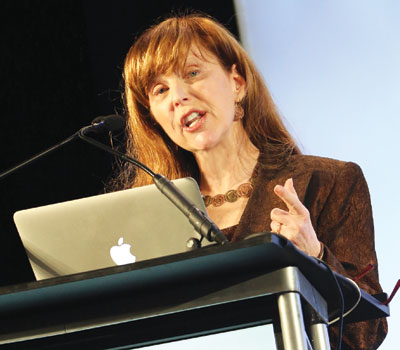 The public can’t seem to learn enough about the brain, judging by the abundance of popular articles, books, and TV programs that seek variously to demystify its inner workings, prevent its decline with aging, or train it to be smarter. But often lost is the fact that not all brains are the same. APS Past President Morton Ann Gernsbacher challenges us to think about how we view differences in brain structure and function.

While some researchers have used neuroimaging to identify common phenomena, Gernsbacher and others have turned their sights toward identifying atypical neural function and structure. In her “Bring the Family Address” at the 25th APS Annual Convention, Gernsbacher, a Vilas Professor at the University of Wisconsin-Madison, illustrated how interpreting research findings in terms of deficits rather than differences reinforces negative stereotypes.

One example is the once-held belief that the physical differences between male and female brains — women’s brains on average weigh less — arose from women’s intellectual inferiority. Gernsbacher said that while neuroscientists no longer believe this about women, other groups have not been so lucky in regard to how their brain differences are interpreted by scientists.

A few years ago, one of Gernsbacher’s PhD students conducted an exhaustive analysis of autism-related neuroimaging studies and found very few consistent patterns of results across studies for any region of the brain. “There were inconsistent findings among the functional imaging studies; there were inconsistent findings among the structural imaging studies. Not one brain region showed a consistent pattern across studies,” Gernsbacher said. “But whenever a difference was reported, even if the direction of the difference conflicted with the finding of another study, the difference was always interpreted as an autistic deficit.”

In the APS journal Perspectives on Psychological Science, Gernsbacher reviewed brain imaging studies that claimed autistic persons have broken mirror neurons. She also found inconsistent results always interpreted as deficits. For instance, one study measured autistic and non-autistic participants’ brain activity during imitation and interpreted autistic participants’ greater task-related activity as evidence of broken mirror neurons. But another study measured activity in the same brain region using a similar task and found the opposite result. Yet that study also claimed the study showed evidence of broken mirror neurons, despite finding a pattern of results.

“I think we as neuroscientists can do better; I think we can be more nuanced when we conceptualize diverse brains. Attributing every finding, regardless of the direction of the effect, to a minority group’s deficit is cheap — and boring,” she said.

One of the most exciting discoveries from the past few years of brain imaging research is the remarkable flexibility of the brains of blind persons, Gernsbacher pointed out. With sight impeded, the region of the brain called the occipital lobe  can’t engage in one of its core functions — processing visual information.  But that doesn’t mean the occipital lobe becomes dormant. Neuroimaging studies show that brains of blind people use “that prime real estate” for other functions, like higher-order reasoning, judgment and decision making, and spoken language comprehension, she said. Gernsbacher suggests that this finding, and its exciting interpretation, provides a model for how we should go about studying other brain differences

Thinking in terms of differences, not deficits, is also important when it comes to quality of life. Behavioral research shows a clear correlation between a person’s acceptance of disability and that person’s psychological well-being. Scientists have used the Acceptance of Disability Scale (a self-report inventory given to people with disabilities) and other measures, to collect data from people of all ages, in numerous countries, and with many types of disabilities; these studies consistently show that the more an individual accepts his or her disability, the more positive the psychological effects. One large-scale US study of nearly 1,300 individuals with a range of disabilities showed that the more the individuals accepted their disability, the more positive their self-esteem. A Belgian study of individuals with chronic fatigue syndrome found that the more individuals accepted the disability, the lower the level of fatigue reported. A Dutch study of 600 people with spinal cord injury also demonstrated a strong and positive correlation between acceptance and well-being.

Gernsbacher noted the Dutch study and others also show that a person’s acceptance of disability is frequently independent of the severity of that person’s disability.

The quality of a person’s life is also not determined by the severity of their disability, as evidenced by multiple studies, including one British study of 50 individuals disabled by prenatal exposure to thalidomide (an anti-nausea and sedative drug introduced in the late 1950s that was later linked to birth defects). In that study the impairments ranged from severe to mild, yet the participants’ self-reported quality of life was independent of objective measures of degree of their impairment. A US study of nearly 100 adults with Parkinson’s disease also demonstrates that quality of life is not determined by the severity of disability; in fact, in this study, optimism was the “primary” predictor of quality of life, Gernsbacher said.

The connection between acceptance and psychological well-being also extends to caretakers of loved ones with a disability. Gernsbacher, who is the mother of a child with autism, notes that the data could not be clearer: the stress a parent experiences because of his or her child’s disability is not related to objective measures of the degree of the child’s abilities. A US study of almost 100 parents of children with congenital heart disease found that the parents’ subjectively reported stress was unrelated to objective measures of their children’s illness, such as operations, hospitalizations, outpatient visits, or a cardiologist’s independent assessment of the severity of the child’s condition. The same highly consistent pattern was shown in studies with children with intractable epilepsy, intellectual disabilities, muscular dystrophy, and autism. Parents’ stress, Gernsbacher said, is primarily related to their “subjective judgments of their children’s impairments.” The more a parent is stressed out, the more serious he or she judges his or her child’s impairment to be.

Interestingly, many of our strategies for accommodating disabilities have become staples of everyday life for everyone: curb cuts in sidewalks are used by bicyclists, people pushing strollers or dollies, or pulling suitcases on wheels; closed-captioning is most used by those wanting to watch television or video quietly, by children to increase reading and literacy skills, and by those learning a second language.

On college campuses, the most frequently requested accommodation made by students with disabilities is for “extended time” on in-class exams, Gernsbacher said. While this accommodation is typically limited to students with documented disabilities, giving all students as much time as they need to take tests has been proven to reduce student anxiety about taking exams and improve the tests’ reliability and validity.

The science of how diverse brains work and how that information is interpreted has wider implications for a diverse and complex world. Understanding and accommodating diverse brains isn’t just good when thinking about persons with disabilities; it’s good for everyone. To learn more about Gernsbacher’s work, visit her lab at www.Gernsbacherlab.org.

Fine, C. (2010). From scanner to soundbite: Issues in interpreting and reporting sex differences in the brain. Current Directions in Psychological Science, 19, 280–283.

A lot of people would like a way out of disability, is something powerful men and women can’t always comprehend. From a superior position it looks like people are ‘stuck’ in more ways than just a set of symptoms. But the reality is, the symptoms are the entire nature of the disease. Perhaps that is what is meant in the above writing.

If symptoms are all that bothers the disabled, then it may prove ridiculous to believe that a person is ‘entirely’ disabled. There may be ‘cracks in the system’ through which creativity and mental dexterity emerge.

As someone with schizophrenia I can attest that far from the mental handicap that some people see it to be, I have been able to express creativity far in excess of the norm in society. Functionality is another matter. My creativity has not resulted in an adequate job, and I remain entrenched in the ratrace of schooling. Oftentimes I wish life were more creative, and I had a way to earn easy money, such as by e-mail consultation, or government programs. However, until society shapes up, much of what I view as reality is a pipe-dream, however tangible its creative angle.

Also, giving various labels to people based on DSM checklists (note: there are no objective tests to detect “mental illness” in brains) creates more anxiety in patients and that itself can lead to additional anxiety and biological changes (even in the brain) through nocebo effects (opposite of placebo – these changes happen through epigenetic and neuroplastic pathways).
We also need to remember that therapies such as mindfulness increases acceptance of any mental condition in patients, and studies have also shown that mindfulness brings about changes in the structure and function of the brain in positive ways.