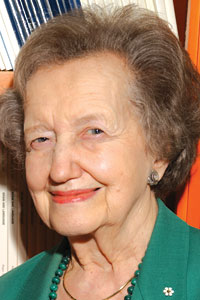 When APS Fellow and Charter Member Brenda Milner was studying Henry Gustav Molaison (aka Patient HM) in the 1950s, awards were not at the forefront of her mind. Decades later, she has been awarded the Pearl Meister Greengard Prize for her novel contributions to neuroscience, especially her work with Molaison.

Milner became interested in Molaison because he could no longer commit new events to long-term memory. She was determined to find out why. From her experiments with Molaison, Milner found that people have multiple memory systems, and her research led to a greater understanding of how the brain works. Milner’s early studies also helped to establish how different hemispheres of the brain interact.

In addition to the prize, Milner received a $100,000 honorarium in a ceremony on November 3 at Rockefeller University.  The prize was founded by Nobel laureate Paul Greengard and his wife Ursula von Rydingsvard to recognize outstanding female scientists, and Greengard donated all of his Nobel Prize money to establish the prize.

Milner, who is the Dorothy J. Killam Professor at McGill University’s Montreal Neurological Institute, has received numerous accolades for her research in addition to the Greengard Prize, including the Gairdner Foundation International Award in 2005 and the Balzan prize in 2009. She is also a member of many prestigious societies, including the Royal Society of Canada and the National Academy of Sciences.

Milner will be interviewed by Carol Tavris for “Inside the Psychologist’s Studio” at the 24th APS Annual Convention in Chicago, Illinois, USA.