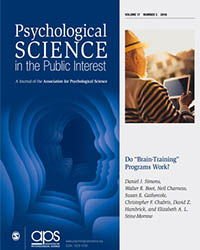 The companies behind many popular brain-training games and apps cite a variety of scientific studies as evidence that their products improve cognition in daily life. A new research report puts those claims to the test, providing a comprehensive review of the studies cited by brain-training proponents and companies. While people may improve on the specific tasks they practice, the researchers conclude that there is no compelling scientific evidence that computerized brain-training programs yield broader cognitive benefits or improve real-world outcomes for their users.

The analysis and an independent commentary on the findings appear in the journal Psychological Science in the Public Interest.

“The idea behind ‘brain training’ is that if you practice a task that taps a core component of cognitive ability, like memory, the training will improve your ability to perform other tasks that also rely on memory, not just in the lab, but also in the world,” explained APS Fellow Daniel J. Simons of the University of Illinois, who led the analyses.

“If you practice remembering playing cards, you’ll get really good at remembering playing cards,” Simons said. “But does that help you remember which medications to take, and when? Does it help you remember your friends’ names? Historically, there is not much evidence that practicing one task improves performance on different tasks in other contexts, even if they seem to rely on the same ability.”

One of the most glaring problems in the cited research was the use of inadequate control groups as a baseline for measuring improvements.

“There are relatively few studies in this literature that objectively measure improvements on the sorts of real-world tasks that users of the programs presumably want to improve — and that the programs’ marketing materials emphasize,” Simons said.

In a commentary accompanying the main report, researchers Jennifer A. McCabe (Goucher College), Thomas S. Redick (Purdue University), and Current Directions in Psychological Science Editor Randall W. Engle (Georgia Institute of Technology) examine evidence for other interventions that may improve cognitive functioning. Although there is little evidence that skills practiced in brain-training games transfer to other real-world tasks, other learning strategies are backed by decades of scientific research.