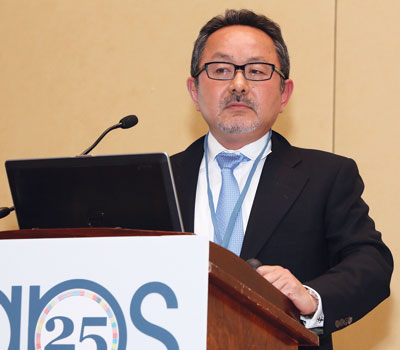 Shinobu Kitayama, University of Michigan, has documented signs of cultural differences embedded in the brain.

The outcomes of our social behavior are clear and present just about every minute of every day — in fact, many of us publish them online rather obsessively (thanks, Facebook; thanks, Twitter). But the biological sources guiding these interactions remain hidden from plain view. An interdisciplinary theme program at the 25th APS Annual Convention burrowed into the brain for a look at these underlying social roots.

Shinobu Kitayama of the University of Michigan has documented signs of cultural differences embedded in the brain. Years ago, in a monster 1991 paper published in Psychological Review, he observed that Westerners tend to have a stronger sense of independence and personal self while Easterners tend to view society from a more holistic perspective. As in other fields of psychology, this research has tested brain responses.

“Now it’s very clear that cultural differences can be demonstrated at the level of the brain — and sometimes even more clear than you can show with behaviors,” he said.

One exciting new development in this work concerns interactions between culture and genes. Lately, Kitayama tested the role of genetics in these differences. Focusing on a dopamine receptor gene called DRD4, he found that people with high-dopamine variants showed significantly stronger cultural differences than low-dopamine types. In other words, culture might be carried by a genetic minority.

Social cognition researcher and APS Past President Susan T. Fiske of Princeton University has made her own transition into the biological bases of behavior. In older work, Fiske, an APS past president, found time and again that people all over the world quickly deduce a person’s level of warmth (i.e., friend or enemy) and competence (i.e., ability to act on intentions). Recently Fiske has sought support for these universal responses in neuroimaging studies.

“Part of what propelled us into the neuro dimension was thinking that, if this is so basic — who’s with me, who’s against me, who’s more competent and less competent than me — there have to be neural signatures of this,” she said. 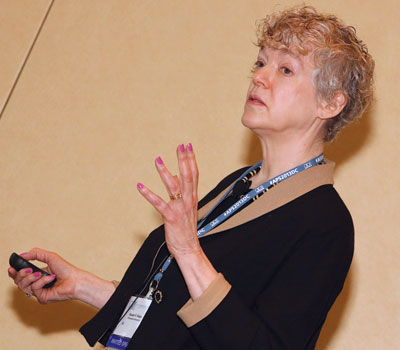 APS Past President Susan T. Fiske, Princeton University, has made her own transition into the biological bases of behavior using neuroimaging in her research on social cognition.

In work published in a 2006 paper in Psychological Science, Fiske gathered functional imaging data from participants viewing photographs of faces. She found activation in the medial prefrontal cortex — considered necessary for social cognition — for all photographs except those representing the low-warmth, low-competence group that includes the homeless or addicts. The work gives neural evidence that extreme out-groups might be dehumanized in our perception of them. Her lab’s more recent work shows that cooperative goals can re-humanize out-groups.

In a number of studies, Harmon-Jones and collaborators have found that activity in the left prefrontal cortex increases during anger. This result goes against traditional notions of affective asymmetry, which ties positive emotions to the left hemisphere and unpleasant ones to the right. However, it fits with motivational asymmetry, which links the left side of the brain with approach and the right side with withdrawal.

Harmon-Jones has used a technique called transcranial direct current stimulation to draw this insight. In these lab experiments, participants are insulted while various parts of the brain are stimulated. When the stimulation increases activity in the left prefrontal region, the anger produces the most aggression (or approach motivation).

Jennifer Bartz of McGill University in Canada discussed the role of the neurohormone oxytocin in helping people form social attachments. Oxytocin has been called the “love hormone” for its documented role in facilitating such behaviors as trust, altruism, and generosity.

But, Bartz cautioned, nuance is important when it comes to understanding the social effects of oxytocin. In a 2010 issue of Proceedings of the National Academy of Sciences, for instance, she and others reported that the effect of oxytocin on memories of maternal care and closeness in childhood depended on a person’s attachment style, with oxytocin administration positively biasing such memories in securely attached individauls, but negatively biasing such memories in anxiously attached individuals. In another study, published in Social Cognitive & Affective Neuroscience, she and her colleagues found that oxytocin actually decreased trust in highly anxiously attached participants. In her recent review, she and her colleagues found that roughly 60 percent of the reported social effects of oxytocin are moderated by features of the person or social context, with a small minority of those studies showing “anti-social” effects. These findings raise the question of whether oxytocin is really a love hormone.

“If we expand our definition of love and think about all the intricacies and the complexities of love, and that it’s not always so pretty, in fact oxytocin may be the hormone of love,” she said. “But it certainly is not a love potion.”

The outskirts of the social spectrum was discussed by University of Chicago’s John T. Cacioppo, APS past president and a leading voice on loneliness. His recent work has shown the biological foundation of social isolation. In recent twin studies, done in conjunction with Dutch researcher Dorret Boomsma, Cacioppo and collaborators have pegged the heritability of loneliness at about 50 percent.

“The genes are like the keyboard on which the song of life is played, but the pianist is the social environment,” he said. “It helps determine which genes are turned on or off.”