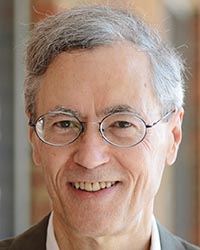 APS Fellow Timothy D. Wilson has been awarded a 2015 William James Fellow Award in recognition of his lifetime contributions to the field of psychological science. Wilson has gained international renown for his groundbreaking research exploring the limits and biases of self-knowledge, happiness, and social cognition. He will deliver his award address at the 27th APS Annual Convention, which will be held May 21–24 in New York City.

Known for combining elegance and rigor in his innovative methodology, Wilson has documented and explored the many ways in which people understand their past actions and feelings and their ability to predict their future emotions. His 1977 paper on the nature and limits of self-knowledge, coauthored with APS William James Fellow Richard Nisbett in Psychological Review, is one of the most heavily cited papers in the history of the field of psychology.

Working in collaboration with APS Fellow Daniel Gilbert, Wilson developed the influential concept of affective forecasting. Their research identified the pervasive effect of unwanted and unconscious influences on judgments and behavior that impact people’s ability to predict how they will feel about particular events and outcomes in the future.

Additionally, Wilson’s pioneering research has demonstrated how modest psychological interventions have the potential to produce significant and sustained changes in behavior. Wilson found that brief interventions aimed at reframing at-risk students’ negative academic experiences as temporary and normal could significantly improve their behavior and academic outcomes.

Wilson, who is Sherrell J. Aston Professor of Psychology at the University of Virginia, has authored two critically acclaimed books, Strangers to Ourselves: Discovering the Adaptive Unconscious and Redirect: The Surprising New Science of Psychological Change, as well as a highly regarded introductory social psychology textbook. Wilson was elected to the American Academy of Arts and Sciences in 2009, and he was named a fellow of the American Association for the Advancement of Science in 2012.

Are you a member of the Society for a Science of Clinical Psychology (SSCP)? If so, you are eligible to apply for the annual SSCP student poster session at the APS Annual Convention. Cash awards of $200 and $100 are given for “best” and “distinguished contribution” posters. To be eligible More

The National Institute of Dental and Craniofacial Research’s travel award is designed to forge connections between research in psychological science and dental, oral, and craniofacial health at APS conventions. More

Thomas E. Joiner is honored for his applied research on suicidal behavior and its prevention, and Richard M. Lerner is recognized for his work on positive youth development. More