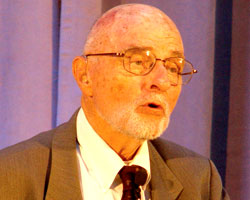 The work Earl Hunt described in his James McKeen Cattell Award Address at the 2011 APS Convention focused on some tough questions about intelligence research — questions like “Who cares about trigonometry?”

This conclusion is just part of Hunt’s answer to an even bigger question  — “What makes a nation intelligent?” National intelligence, he explained, depends on cultural values, social structures and economic resources — even the physical environment plays a role in cognitive ability. To have intelligent citizens, a nation needs the social and physical scaffolding on which intelligence can be built.

But why should we be worried about national intelligence? As it turns out, measures of intelligence serve as a strong predictor of economic and social success for individuals.

And, to some extent, these patterns hold up at the national level. According to a controversial 2002 study by Lynn and Vanhanen, nations that perform better on tests of general cognitive ability tend to have a higher gross domestic product (GDP) and had better results from a variety of political and social measures. Lynn and Vanhanen used these results to support the genetic hypothesis of intelligence, which states that the greater part of a nation’s cognitive potential derives from its citizens’ genetics.

Hunt ran down a laundry list of problems with Lynn and Vanhanen’s methods, particularly their measures of general cognitive ability. The data they used came from intelligence tests that were written for people in developed nations and administered with little context to people in developing nations. This “drop in from the sky” paradigm measures a certain set of test-taking skills, said Hunt, but it doesn’t accurately measure overall intelligence. “Test-taking skills are a non-trivial part of the skills that make up intelligence,” Hunt said, “but they are only a part.”

Even correcting for these dubious methods, Hunt and other intelligence researchers have found that the correlation between cognitive ability and economic success holds up.

Hunt freely admitted to the strength of the correlation between the intelligence of a nation and its income, but stressed that these results by no means imply a relationship between genes and intelligence. Instead, Hunt proposed a model of national intelligence that builds on the resources a nation has at hand — environmental, social, and economic resources.

Although an environmental impact on intelligence might seem far-fetched, Hunt used publicly available data to demonstrate that the physical environment can impact cognitive ability. He cited the example of a Peruvian school in which students had higher levels of lead in their blood than any safety standards would allow because the school was situated next to a lead dump. The students performed worse on standardized tests than students from neighboring schools with lower lead levels.

People in developing countries are also more likely to suffer from malnutrition than people in North America or Europe, “and that’s affecting the brain, right down at the physical information processing level,” said Hunt. Hunger has indirect effects as well. Studies have shown that nutritionally deprived students have greater difficulty paying attention in school. “You can’t just improve the schools or improve the nutrition — you’ve got to do both,” said Hunt.

Poverty also has an effect on intelligence: Families in poorer regions often can’t afford to send their children to school, and in many cases they need their children to stay out of school and work to support the family. “This can vary from tending goats on the savanna to selling little badges or picking pockets in crowded third world cities” said Hunt.
Hunt also emphasized the impact of cultural values on intelligence — for a nation to increase its intelligence, it must place a high value on new ideas. As an example, Hunt pointed out that most of the nations on the Silk Road became successful because they were eager to acquire new cognitive capital by trading goods and ideas. In contrast, nations that shut themselves off from the world, such as 17th-century Japan, became less prosperous because they had deprived themselves of new ideas.

Overall, Hunt switched the emphasis from the impact of brainpower on economics to the impact of economics on brainpower by suggesting multiple factors can account for the relationship between IQ and GDP. He said cognitive ability is based on so many interrelated factors — environment, economics, cultural values, social structures, and others — that it’s folly to pinpoint any single factor as being responsible for a nation’s intelligence.

What’s more, addressing these factors one by one — by building schools, providing funding, or cleaning up toxic waste — might not be enough to make a nation more intelligent. Educators need to be prepared to impact a community on multiple levels if they want to change IQ scores. Or else, said Hunt, the outcome will always be “the rich get smarter, and the smart get richer.”