Behavioral scientists have made great strides convincing policymakers to embrace the concept of nudges — interventions designed to steer people’s behavior in a preferable direction while preserving their freedom of choice. But APS Fellow Ralph Hertwig, Max Planck Institute for Human Development, Berlin, is proposing a second kind of intervention that he calls “boosts.” In a new article in Perspectives on Psychological Science, Hertwig and philosophy professor Till Grune-Yanoff (Royal Institute of Technology in Stockholm) explain the differences between the two types of policy strategies. APS asked Hertwig about the “boost” concept. 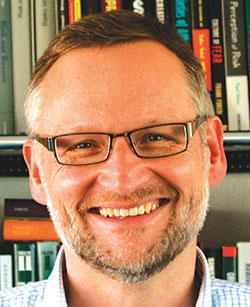 We’ve heard about the “nudge” concept for years, and field studies have shown that nudges can work as policy interventions. What exactly is the difference between a nudge and a boost?

Nudges aim to change people’s behavior, while boosts aim to strengthen the underlying competence that enables a behavior. When a nudge is used as a policy intervention, it steers people’s behavior in the direction that policy-makers deem desirable. That takes away some autonomy from the decision-maker. When a boost is applied, it is up to the decision-maker to decide whether to engage the new competence (e.g., a skill, routine, or heuristic), and to what end. And whereas nudges focus almost exclusively on the external choice architecture, boosts also target the person’s cognitive repertoire. For example, a typical nudge would be to rearrange a school cafeteria such that healthy foods are at eye level and junk foods are harder to see (and reach). A boost would aim to give people the competence to choose healthy foods in diverse environments. An example of such a boost is a simple food rule such as Michael Pollan’s “Don’t eat anything your great-grandmother wouldn’t recognize as food.”

How did you come up with the concept? What from the behavioral science literature supports this concept?

Reading about the nudge framework, I came to realize that it reflected only a subset of what we’ve learned from behavioral science (predominantly from research done within the heuristics-and-biases research program) and neglected research that casts people’s capacity to make decisions in a more favorable light — for example, the study of naturalistic decision-making, simple and ecologically rational heuristics, and the mind as an intuitive statistician. These research programs indicate that we don’t need to give up on people’s ability to make good decisions but rather can work with people to improve their own competencies.

Are there some existing behavior-change models or field trials that you’d consider more of a boost than a nudge?

Definitely. Consider motivational boosts. I’m a fan of Carol Dweck and her colleagues’ research on growth-mindset interventions. They show that simple instructions that focus on students’ beliefs about learning and intelligence can boost motivation and achievement. When students learn to apply such interventions on themselves, they acquire the ability to better regulate their motivation and exercise more self-control in important domains of their lives.

Are there any of your own behaviors that you’ve been able to change through a boost?

I consciously apply nudges to boost myself. For example, I manage my chocolate consumption by stashing my supply in remote corners of the kitchen that I can’t easily reach. But I can only rearrange my “private” choice architecture in this smart, simple way because I understand the rationale behind this nudge. Letting people into the secrets behind some nudges is another way to help them develop the competence to design their choice environments according to their own preferences and goals.

Observer > 2017 > December > Back Page: A Conversation with Ralph Hertwig