America is a rapidly graying society. This demographic trend has been underway for a while—and anticipated for a long while—yet some of its implications are just now coming into focus. Most notably, the aging of America will almost certainly trigger a retirement crisis, with elderly boomers competing for limited financial and medical resources—and working longer just to stay afloat.

The elderly have never been honored in American society. They have more often been stereotyped, stigmatized and pitied as outdated and weak, both physically and mentally. And according to Princeton University psychological scientist Susan Fiske, this unfair ageist stereotyping could become even darker with the new influx of seniors. Fiske predicts the emergence of new, prescriptive stereotypes—stereotypes that dictate what seniors should and should not do in an era of scarce resources. These new stereotypes will likely be more hostile than what we’ve known so far, and what’s more, they will be wielded mostly by the young in an acrimonious generational conflict.

Fiske identifies three new stereotypes that she believes might be fueled by scarcity. The first has to do with jobs and succession. In the past, Americans often retired at about age 65, making way for the young to move into the workforce and become adults. But recent disruptions in the job market have eroded earnings and depleted savings, forcing many seniors to delay retirement, sometime indefinitely. There is no evidence that job performance declines with age, but from the perspective of young people, this rethinking of retirement is limiting their opportunities. And since 60-somethings have more wealth than do 20-somethings, the young are coming to believe that the “greedy geezers” should step aside.

Perceived greed is at the heart of this stereotype. Fiske believes this competition for jobs and wealth will intensify, and along with it a competition for shared public goods. Traditional entitlement programs—Social Security and Medicare—are being depleted more rapidly than anticipated, causing many young people to view the elderly as financial adversaries who are taking more than a fair share and compromising their future.

Many of these societal changes are causing aging boomers to reinvent old age, in part by staying healthy and active and acting young. This is a good thing, but even this positive adaptation could spark a backlash against the elderly, Fiske predicts. Young people are motivated to draw and enforce generational boundaries, for the sake of their own self-esteem and autonomy. So we may hear from American youth the admonition to “act your own age.” 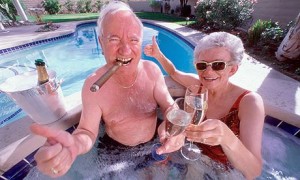 These are all just predictions at this point, but Fiske does have some preliminary evidence to suggest that these new stereotypes are already gaining power. She and her Princeton colleague Michael North ran six experiments to see if young people in particular are targeting the elderly for perceived violations of these norms. The experiments all involved judging hypothetical people of various ages who either violated or adhered to these emerging norms. An elderly woman might demand an expensive medical procedure because she is entitled to it, for example, or she might forgo it. A graying man might sport a Black Eyed peas T-shirt—violating the youth boundary—or a more acceptable Frank Sinatra T-shirt. And so forth.

The results are not encouraging. Across all the studies, younger subjects (compared to middle-aged and older volunteers) were more resentful toward the elderly when they violated prescriptive norms—conserving their personal wealth, acting entitled, or acting too young. They were more punitive against violators, and more rewarding toward old people who complied with the new stereotypes.

Ageism is not new, but the resentment and punitive attitudes are new. Fiske’s body of work, which she is discussing this week at the meeting of the Association for Psychological Science, has shown that our judgments of other people are based on rapid assessments of their warmth and their competence. Ageist stereotypes have traditionally described the elderly as warm and well-intentioned, but incompetent—in short, pitiable. But these emerging ageist stereotypes suggest that other emotions are being roiled: Benevolent, pitying ageism of the past may be supplanted by envy or even contempt if the aging boomers refuse to cede America’s scarce resources to the young.

Wray Herbert is reporting this week from the 25th annual convention of the Association for Psychological Science in Washington, DC.

Interesting as to all of a sudden as boomers become victims of ageism it’s now a major problem. Because it didn’t exist before and youths and their ideas are not discredited on the sole factor of age.

iNTERESTING THAT we’re seeing fierce intergenerational warfare in the UK. Butler had much to say about this in The Longevity Revolution, 2008. I think this is more to do with ‘Young people … for the sake of their own self-esteem and autonomy.’ It also reflects very callow, immature thinking.