News > We're Only Human > Lean On: Workers, Work and the Spouses Who Help Us Succeed

Sheryl Sandberg had a good year last year. She was named chief operating officer of Facebook, and also published the bestselling book Lean In: Women, Work, and the Will to Lead, which has sold more than a million copies and has sparked a movement among professional women. She is a perennial on Forbes’ list of most powerful women in business.

Lean In is aimed primarily at women who aspire to leadership roles in the competitive world of business, but Sandberg makes it clear she is also talking to men who want to live in a more equitable world. She writes: “A truly equal world would be one where women ran half our countries and companies and men ran half our homes.”

She might have amended that to read: “ran half our homes in a dutiful, organized and dependable manner.” 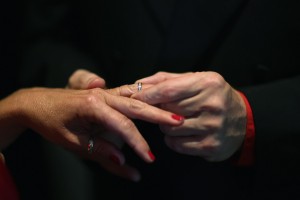 Social scientists have for years been interested in how spouses contribute, if at all, to their partners’ occupational success. Clearly dysfunction and stress at home can spill over into the workplace, but what about the basic dispositional makeup of our spouses? Does personality somehow seep into the workplace, affecting success and satisfaction—even income and wealth? We marry for “richer or poorer,” but does our choice of partner actually make us richer or poorer?

That’s the question posed by Brittany Solomon and Joshua Jackson, two psychological scientists at Washington University in St. Louis. They theorized that the basic, stable personality traits of our partners can in fact play a key role in workplace success. They were particularly interested in a trait called conscientiousness, which encompasses self-discipline and order and a sense of duty and personal responsibility. Conscientiousness is one of the so-called Big Five dimensions of personality, the others being openness, extraversion, agreeableness and neuroticism. Solomon and Jackson were interested in how all of these traits might contribute to partners’ success, but they suspected that conscientiousness might be the major influence because of its pragmatic utility: Simply put, when a partner keeps the home running efficiently—chores and finances and planning—that frees up the worker to spend his or her energy and cognitive resources on work.

The scientists call the “outsourcing”—and it’s the most obvious path by which personality might affect a partner’s work. But it’s not the only path. A spouse’s personality might also create an “emulating effect,” where one partner takes on certain of his or her partner’s traits, which then affect work and success. If my spouse is pragmatic and hard-working, for example, I might emulate those characteristics over time, and benefit by them at work. Finally, a spouse’s personality—being reliable or cheerful—can affect a partner’s mood and stress, which spills over into the workplace.

Solomon and Jackson tested all three of these ideas, studying couples over a period of five years. The working spouses ranged in age from 19 to 83. Both partners worked in most of the couples, although a sizeable minority were single-income households. The subjects took a standard personality test, and also completed measures of job satisfaction, job promotions and income. The scientists also devised measures of outsourcing, emulation and relationship satisfaction, in order to test the three hypotheses.

The results were clear and interesting. First—leaving spouses aside—personality clearly influences both intrinsic and extrinsic success over time. Specifically, extraversion, agreeableness and conscientiousness are associated with future job satisfaction, and neuroticism with less job satisfaction. Conscientiousness also predicts higher income, and agreeableness predicts lower income and fewer promotions. Both extraversion and neuroticism—irritability and emotional instability—are linked to greater likelihood of being promoted.

This was all known before. What’s new here is that, above and beyond the worker’s own traits, having a conscientious spouse also boosts job satisfaction. Having an extraverted spouses helps too, but not as much. Spousal personality also predicts the likelihood of promotion and income, and again it is conscientiousness that plays the key role. This was true for both single-income and dual-income households, but interestingly, conscientiousness boosted income even more for single-income couples, suggesting that these workers are outsourcing more to their unemployed partners.

In general, the benefits of partner personality accrue not because that partner does the other’s work, but because he or she creates the conditions that allow the spouse to work effectively. A highly conscientious partner appears to shape a working partner’s success in all three ways that the scientists explored. The working spouse is able to conserve time and energy for work. He or she adopts the pragmatic habits that contribute to occupational success. And there are fewer relationship problems to drain personal resources. These dynamics occur whether the working spouse is conscientious or not, and they occur equally for men and women, suggesting that it is always beneficial to have an orderly, responsible partner.

Solomon and Jackson finish their report, in a forthcoming issue of the journal Psychological Science, by talking about the dating market. Most people who are looking for a romantic partner pay special attention to agreeableness—and a lack of neuroticism. These traits are apparent right away, and they are beneficial for the smooth running of relationships. But choosing a partner who is especially conscientious may be more advantageous over the long haul: “Initially, marrying a conscientious partner could sound like a recipe for a rigid and lackluster lifestyle; however, the reality of doing so is more likely to yield personal and professional prosperity.”

News > We're Only Human > Lean On: Workers, Work and the Spouses Who Help Us Succeed

CASBS is now accepting applications for its 2022-23 residential fellowships.