I am a Baby Boomer and a child of the ‘60s, and for both those reasons I am keenly aware of my memory, and its failings. I’m not alone in this. For a growing number of adults, questions about cognitive aging are increasingly personal and relevant. We want to know what, specifically, will keep us sharp into old age. Will reading Tolstoy do it? Or playing racquetball? Taking a class in Civil War history, or Portuguese? How about mastering Thai cooking? Or simply surrounding ourselves with good friends and stimulating conversation?

Unhappily, there is very little empirical evidence available to help Baby Boomers sort all this out. It appears that adults who are engaged, socially and intellectually, gain some cognitive advantage over those who are disconnected, but this evidence is spotty and vague. Few studies have rigorously evaluated this specific hobby or activity and compared it to that one. Until now.

Welcome to the Synapse Center, a senior activity center located in a strip mall in Dallas, Texas.  The Center seconds as a cognitive aging lab for psychological scientist Denise C. Park and a team of colleagues at the University of Texas at Dallas, who have been trying to focus in on particular activities to see what works, what doesn’t, and why. The Synapse Project differs from other cognitive training, in that the participants agree to commit to a lifestyle change, learning a new, real-world skill in a social environment that demands the use of core cognitive abilities. The scientists believe—but wanted to document—that productive engagement is the key to maintaining mental sharpness. 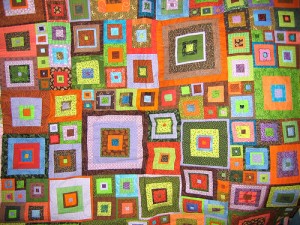 There are obviously many club activities that Park and her co-workers might have studied. They chose to examine quilting and digital photography, which club members, age 60 to 90, studied intensely—15 hours a week—for three months. These two hobbies both involved continuous learning of novel and increasingly complex material, but they made somewhat different mental demands. The photography students learned how to use a SLR camera and the computer skills needed for photo editing—skills that tap into executive functioning, long-term memory and reasoning. Those in the quilting class learned to piece together and visualize abstract shapes and integrate them into complex patterns, putting demands on visual and spatial working memory and reasoning. A third group divided their time between the two new activities—presumably getting more breadth of mental stimulation but less of any one cognitive demand.

There were three other groups. Some participated in social activities at the Center—field trips, games of chance and different kinds of entertainment—which required meeting and socializing with new people but no formal training. This was meant to mimic the kind of social club available to many seniors. Others participated at home, where they engaged in activities that many believe to be beneficial, but actually have not been proven so—working on puzzles, for instance, or listening to classical music. Still others did nothing out of the ordinary, serving as controls.

The scientists took a variety of cognitive measures before and after the classes began. As described in a forthcoming issue of the journal Psychological Science, they found that productive engagement in either or both activities—photography and quilting—led to a significant gain in memory, compared to more passive lifestyles. But there were some surprises in the results. They expected that the photography students would show greater improvement in verbal memory after three months of study, and that the quilters would show more gains in spatial ability. In fact, the results showed that the photography students—including the part-timers—did have a significant boost in memory when compared to the quilters. But the quilters did not outperform the photographers in spatial processing. Indeed, the photographers had a slight edge in this skill as well.

So what’s with the quilting? Why did digital photography have far more beneficial effects on cognition, especially memory?  It’s not entirely clear, but it could be because this class exercised memory much more intensely; novice students were required to learn a great deal of highly technical information in a short time. The quilting, by comparison, involved much more in the way or procedural learning and less acquisition of new and unfamiliar information.

The real surprise from the Synapse Club was that socialization was not nearly as beneficial as anticipated–or as it’s widely believed to be. That is, merely being around others and casually interacting–that alone is not enough to keep us sharp. Let’s put our heads down. It’s going to take some work.

Excerpts from Wray Herbert’s blogs—“We’re Only Human” and “Full Frontal Psychology”—appear regularly in The Huffington Post and elsewhere.