Contrary to previous assumptions, researchers find that preschoolers are able to gauge the strength of their memories and make decisions based on their self-assessments. The study findings are published in Psychological Science, a journal of the Association for Psychological Science. 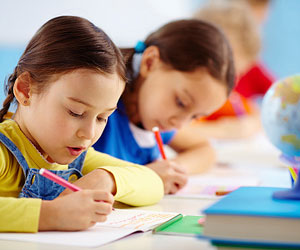 “Previously, developmental researchers assumed that preschoolers did not introspect much on their mental states, and were not able to reflect on their own uncertainty when problem solving,” says psychological scientist Emily Hembacher of the University of California, Davis, lead author of the study. “This is partly because young children are not usually able to tell us much about their own mental processes due to verbal limitations.”

In several previous studies in their lab, Hembacher and co-author Simona Ghetti observed that preschoolers reported feeling uncertain after giving wrong answers during tasks, suggesting the preschoolers were capable of metacognition — the ability to evaluate one’s own thoughts and mental states.

The researchers decided to examine preschoolers’ metacognition about their memories, given its importance for learning.  They investigated whether kids could assess their confidence in their memories and use those assessments in deciding whether to exclude answers they had generated but were unsure of when given the option.

Eighty-one children ages 3, 4, and 5 participated in the study.  The preschoolers viewed a series of drawings of various items, such as a piano or a balloon.  Half of the images were presented once, and the other half were shown twice.  Next, the children were presented with a pair of images: one they had seen, and a new one they had not seen.  The children were instructed to pick which image they’d seen before in the previous task.

After making their choice, the preschoolers rated how confident they were that their choice was correct.  They then sorted their answers into two boxes.  One box was for the responses that children were confident about and wanted researchers to evaluate for a prize.  The other one was for responses the children thought might be mistaken and that they didn’t want researchers to see.

The data revealed that only 4- and 5-year-olds reported being less confident in their incorrect than their correct memory responses.  They were also more confident about images they’d seen twice, suggesting that they could distinguish between stronger and weaker memories. Older preschoolers were also more likely to decide whether they wanted researchers to see their answers based on their confidence level.

Although 3-year-olds didn’t display the same kind of metacognitive capability on individual responses, the data showed that 3-year-olds who had scored well reported higher confidence overall than kids who hadn’t scored as well.

When the researchers analyzed just the correct answers, they found that preschoolers of all ages sorted responses they weren’t as confident about to the box they didn’t want researchers to evaluate.  So, while they may not be as advanced as their older peers, even children as young as 3 seem to display some ability to reflect on their own knowledge.

The findings contribute to research on the reliability of children’s eyewitness testimony in a court of law, and they carry important implications for educational practices.

“Previous emphasis on the development of metacognition during middle childhood has influenced education practices aimed at strengthening children’s monitoring and control of their own learning,” says Hembacher. “Now we know that some of these ideas may be adapted to meet preschoolers’ learning needs.”

This research was supported by a grant from the National Science Foundation (NSF; BCS 0843428) to S. Ghetti.

All data have been made publicly available via Open Science Framework and can be accessed at https://osf.io/5zimh/. The complete Open Practices Disclosure for this article can be found at http://pss.sagepub.com/content/by/supplemental-data. This article has received the badge for Open Data. More information about the Open Practices badges can be found at https://osf. io/tvyxz/wiki/view/ and http://pss.sagepub.com/content/25/1/3.full.