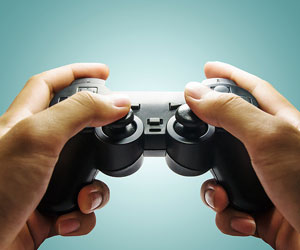 Playing action-based video games may boost players’ ability to coordinate incoming visual information with their motor control, a skill critical to many real-world behaviors including driving, new research shows. The findings are published in Psychological Science, a journal of the Association for Psychological Science.

Experience playing some types of video games has been shown to confer benefits for specific visual abilities, such as sensitivity to contrast and visuospatial attention. Despite the fact that many video games place high demands on visuomotor abilities, little research had investigated whether playing such games was associated with visuomotor control. Li, with co-authors Rongrong Chen (The University of Hong Kong) and Jing Chen (The University of Hong Kong), devised a series of studies to explore the possible link.

Using a driving simulation, the researchers compared the visuomotor abilities of experienced players of action video games (those who had played at least 5 hours per week over the previous 6 months) to participants who had negligible action video game experience.

The participants saw a display that showed a simulated road with lane markers. In three 95-second trials, they were tasked with steering a virtual vehicle down the lane, straying as little as possible from the center while compensating for crosswinds that affected the direction of the car.

Participants’ performance on the task showed that experience mattered: Experienced action gamers showed much greater precision in keeping to their lane, and showed less deviation from center in the face of increasing headwinds, when compared to the participants with little to no action video game experience.

The researchers saw similar results when they tested participants on another visuomotor control task that involved using a joystick to keep a target dot from floating away from the center of the screen.

The two games featured similarly complex visual scenes and were both relatively easy to learn. Importantly, the two groups showed similar levels of engagement with the games and similar improvement in performance over time.

The data showed that playing Mario Kart, a fast-paced action video game, improved participants’ visuomotor control skills on the target dot task after 5 hours of training; they showed even greater improvement after 10 training sessions. Those who played Roller Coaster Tycoon, a non-action strategy game, showed no such improvement over time.

Intriguingly, the two kinds of action games had different effects on specific aspects of visuomotor control, suggesting that they may be suited as training tools for somewhat different audiences.

“The differing effects of driving and FPS video games on the sensorimotor system suggest that for experienced drivers, who have stable control but need to improve their ability to predict input error signals, training with FPS rather than driving video games is more effective,” Li explains. “In contrast, for novice drivers, who are still struggling with obtaining stable control, training with driving rather than FPS video games is more helpful.”