News > Latest Research News > Personal Judgments Are Swayed by Group Opinion, but Only for 3 Days

We all want to feel like we’re free-thinking individuals, but there’s nothing like the power of social pressure to sway an opinion. New research suggests that people do change their own personal judgments so that they fall in line with the group norm, but the change only seems to last about 3 days. The research is published in Psychological Science, a journal of the Association for Psychological Science. 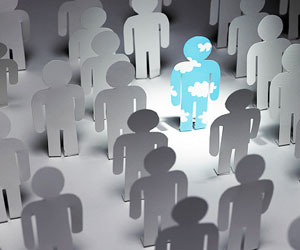 “Our findings suggest that exposure to others’ opinions does indeed change our own private opinions — but it doesn’t change them forever,” says psychological scientist and study author Rongjun Yu of South China Normal University. “Just like working memory can hold about 7 items and a drug can be effective for certain amount of time, social influence seems to have a limited time window for effectiveness.”

The fact that personal judgments are swayed by the opinions’ of others is a well-established phenomenon in psychology research.

But it’s unclear whether oft-observed social conformity reflects public compliance, motivated by a desire to fit in with the group and avoid social rejection, or private acceptance, which leads to a genuine change in personal opinion that persists even when social influence is removed.

Yu and colleagues Yi Huang and Keith Kendrick decided to investigate this question in the lab. They recruited Chinese college students to participate in a study exploring how “people perceive facial attractiveness.” The students looked at 280 digital photographs of young adult Chinese women and were asked to rate the attractiveness of each face on an 8-point scale.

The students were brought back to the lab to rate the faces again after either 1 day, 3 days, 7 days, or 3 months has passed.

The data showed that the group norm seemed to sway participant’s own judgments when they re-rated the photos 1 and 3 days after the initial session.

There was, however, no evidence for a social-conformity effect when the intervening period was longer (either 7 days or 3 months after the first session).

According to the researchers, the fact that participants’ opinions were swayed for up to 3 days suggests more than a superficial lab-based effect — rather, group norms seem to have had a genuine, albeit brief, impact on participants’ privately held opinions.

These studies are notable, says Yu, because they were able to control for methodological issues that often arise in studies that use a test-retest format, such as the natural human tendencies to regress to the mean and to behave consistently over time.

The one question that Yu and colleagues still don’t know the answer to is why the effect lasts for 3 days. They plan on investigating whether there might be a neurological reason for the duration of the effect, and whether the effect can be manipulated to last for shorter or longer durations.

This study was supported by the National Natural Scientific Foundation of China (Grant 31371128 to R. Yu) and by the Scientific Research Foundation of Graduate School of South China Normal University (Grant 2013kyjj060 to Y. Huang).

News > Latest Research News > Personal Judgments Are Swayed by Group Opinion, but Only for 3 Days