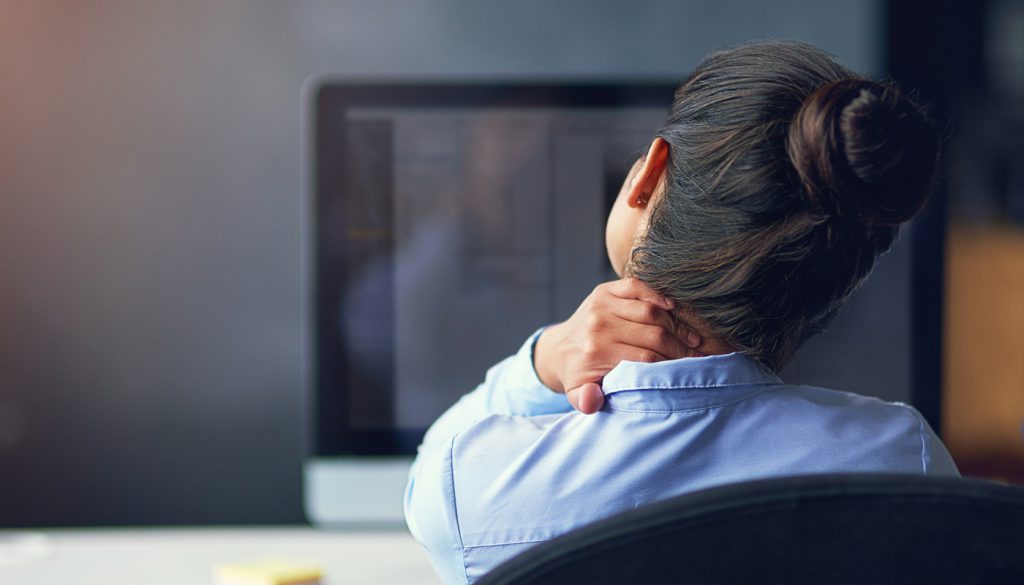 It may seem like our experiences of pain stem from some objective, physiological source, but research has shown that many factors — including sensory, cognitive, and emotional cues — can have a significant influence on if, when, and how we feel pain. These new results indicate that altering the visual cues that inform the brain about the body can impact pain:

“Our findings show that the brain does not need danger messages coming from the tissues of the body in order to generate pain in that body part — sensable and reliable cues that predict impending pain are enough to produce the experience of pain,” says researcher G. Lorimer Moseley of the University of South Australia. “These results suggest a new approach to developing treatments for pain that are based on separating the non-danger messages from the danger messages associated with a movement.”

Moseley, co-author Daniel Harvie, and colleagues recruited 24 chronic neck pain sufferers from physiotherapy clinics. The participants had experienced the pain for an average of 11 years, stemming from issues including posture, tension, repeated strain, trauma, and scoliosis.

The researchers had participants sit in a chair while wearing a virtual reality head-mounted display (Oculus Rift). The display showed a virtual indoor or outdoor scene while simultaneously recording participants’ head movements using gyroscopes. The participants wore a seatbelt that prevented them from moving their torso and they also wore headphones that blocked out incidental noise.

For each scene that was presented, the participants were asked to rotate their head, either to the left or to the right, until they experienced pain. What the participants didn’t know was that on some trials the researchers were manipulating the visual feedback provided in the virtual world so that it didn’t accurately represent the degree to which the head was turned. In some cases, the scene indicated that participants weren’t turning their head as far as they actually were — it understated the degree of rotation. In other cases, the feedback indicated to participants that they were turning their head farther than they were, overstating the degree of rotation.

The results showed that the visual feedback played an important role in determining when the participants reported feeling pain.

Importantly, the participants didn’t report any differences in the intensity of pain across the various conditions.

The researchers note that their work, though experimental in nature, could have significant implications for the clinical treatment of pain:

“If cues signaling danger amplify or indeed trigger pain, then these cues present a novel target for therapy,” they conclude.

All data have been made publicly available via the Harvard Dataverse Network and can be accessed at http://thedata.harvard.edu/dvn/dv/PainData. The complete Open Practices Disclosure for this article can be found at http://pss.sagepub.com/content/by/supplemental-data.

This article has received the badge for Open Data. More information about the Open Practices badges can be found at https://osf.io/tvyxz/wiki/view/ and http://pss.sagepub.com/content/25/1/3.full.

Back Page: Experiments in Different ‘Worlds’