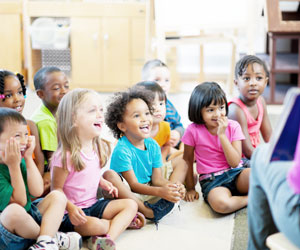 Researchers found that 4-year-olds in Head Start classrooms that included higher concentrations of 3-year-olds were up to five months behind in academic development compared with their peers in classrooms that had fewer younger children.

As of 2009, about 75 percent of all Head Start classrooms were mixed-age. Head Start is a federal preschool program that promotes the school readiness of children in low-income families from age 3 to age 5.

“While there has been some enthusiasm for mixed-age classrooms, our results suggest there may be a significant downside for older children,” says Kelly Purtell, co-author of the study and assistant professor of human sciences at The Ohio State University.

“Four-year-olds are often enrolled in classrooms that are less supportive of their academic learning.”

The results may also help explain why a 2010 national evaluation of the Head Start program found that it was only modestly effective in helping the academic achievement of 4-year-olds.

“Mixed-age classrooms may be one reason that older children don’t seem to benefit as much from Head Start as do younger children,” says Arya Ansari, lead author of the study and a graduate student in human development and family sciences at the University of Texas at Austin.

Purtell and Ansari conducted the study with Elizabeth Gershoff, an associate professor at UT-Austin.

The researchers used data from the Family and Child Experiences Survey, a nationally representative sample of 3- and 4-year-old Head Start attendees across 486 classrooms nationwide.

This study included 2,829 children who were tested in fall 2009 and spring 2010 to determine how much they progressed during that time on assessments of language and literary skills, math skills, social skills and behavior.

Findings showed that a higher proportion of 3-year-olds in the classroom was linked to lower gains in math and in language and literacy skills among 4-year-olds.

When 3-year-olds composed just 20 percent of a class, older children in the class were nearly two months behind academically in comparison to their same-aged peers in other classes.

But when younger children made up nearly half the class, 4-year-olds were roughly four to five months behind their same-aged peers in academic development.

“Not only did we see limits in academic growth in 4-year-olds, but we also didn’t see any academic gains for 3-year-olds who were in these mixed-age classrooms,” Purtell says. “So there was no real benefit for the younger children.”

There was no effect on social or behavioral skills for either age group in mixed-age classes.

This study didn’t look at why mixed-age classrooms hurt older children’s academic gains. But other research suggests two possibilities. One explanation may be that interacting with younger peers does not provide as much gain for older children as interacting with peers at the same or higher skill levels in math and language.

Another possible explanation is that teachers modify their classroom practices to accommodate a wider range of skill levels, which leads to older children hearing content they’ve already been exposed to and feeling disengaged.

It is likely that both factors play a role, Purtell says.

According to Ansari, it may not be feasible for many Head Start programs to separate children by age.

“That means we need to figure out what teachers and programs can do to foster a more cognitively stimulating environment for the older children,” he says.