Previous studies with adults have shown that when the skin is stroked, a specific type of touch receptor is activated in response to a particular stroking velocity, leading to the sensation of “pleasant” touch. Cognitive neuroscientist Merle Fairhurst of the Max Planck Institute for Human Cognitive and Brain Sciences in Leipzig, Germany, and colleagues hypothesized that this type of response might emerge as early as infancy. 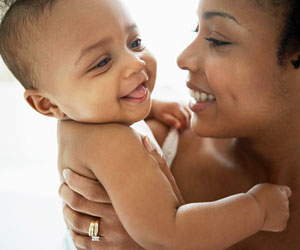 For the study, Fairhurst and colleagues had 9-month-old infants sit in their parents’ laps while the experimenter stroked the back of the infant’s arm with a paintbrush. The experimenter varied the rate of the brushstrokes among three defined velocities (0.3, 3, or 30 cm per second). The experimenters gauged the infants’ responses through physiological and behavioral measures.

The results showed that the infants’ heart rate slowed in response to the brushstrokes but only when the strokes were of medium velocity; in other words, the touch of the medium-velocity brush helped to decrease their physiological arousal.

The infants also showed more engagement with the paintbrush during the medium-velocity brushstrokes, as measured by how long and how often they looked at the brush while they were being stroked.

Interestingly, infants’ slower heart rate during medium-velocity brushstrokes was uniquely correlated with the primary caregivers’ own self-reported sensitivity to touch. That is, the more sensitive the caregiver was to touch, the more the infant’s heart rate slowed in response to medium-velocity touch.

The researchers note that this link between caregiver and infant could be supported by both “nurture” and “nature” explanations:

According to the researchers, the findings “support the notion that pleasant touch plays a vital role in human social interactions by demonstrating that the sensitivity to pleasant touch emerges early in human development.”

They argue that the ability to perceive and sensitively response to pleasant touch is likely vital early in life because of the fundamental role that touch plays in affiliation, bonding, and synchrony between infants and caregivers.

Fairhurst and colleagues plan on extending these findings by exploring the brain basis of pleasant touch using neuroimaging tools and by investigating the psychological effects that pleasant touch has on infants’ social functioning.

This research was carried out in the Early Social Development Laboratory at the MPI CBS and supported by the Max Planck Society. L. Löken is supported by a Sir Henry Wellcome Postdoctoral Fellowship.

Co-authors on the paper include Tobias Grossmann of the Max Planck Institute for Human Cognitive and Brain Sciences in Leipzig, Germany and Line Löken of the University of Oxford, UK.