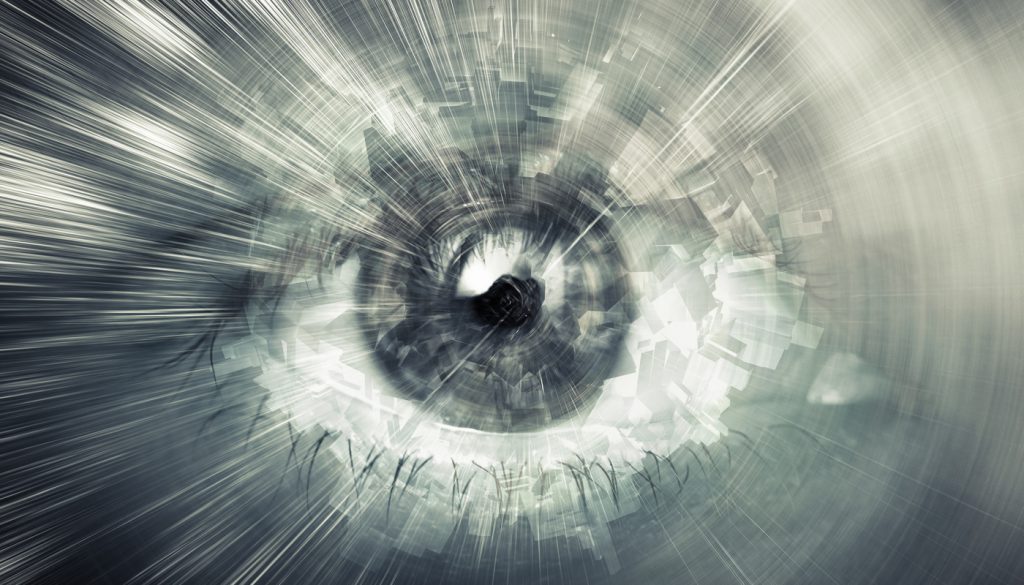 What we see in the periphery, just outside the direct focus of the eye, may sometimes be a visual illusion, according to new findings published in Psychological Science, a journal of the Association for Psychological Science. The findings suggest that even though our peripheral vision is less accurate and detailed than what we see in the center of the visual field, we may not notice a qualitative difference because our visual processing system actually fills in some of what we “see” in the periphery.

“Our findings show that, under the right circumstances, a large part of the periphery may become a visual illusion,” says psychology researcher Marte Otten from the University of Amsterdam, lead author on the new research. “This effect seems to hold for many basic visual features, indicating that this ‘filling in’ is a general, and fundamental, perceptual mechanism.”

As we go about daily life, we generally operate under the assumption that our perception of the world directly and accurately represents the outside world. But visual illusions of various kinds show us that this isn’t always the case. As the brain processes incoming information about an external stimulus, we come to learn, it creates a representation of the outside world that can diverge from reality in noticeable ways.

Otten and colleagues wondered whether this same process might explain why we usually feel as though our peripheral vision is detailed and robust when it isn’t.

“Perhaps our brain fills in what we see when the physical stimulus is not rich enough,” she explains. “The brain represents peripheral vision with less detail, and these representations degrade faster than central vision. Therefore, we expected that peripheral vision should be very susceptible to illusory visual experiences, for many stimuli and large parts of the visual field.”

Over a series of experiments, the researchers presented a total of 20 participants with a series of images. The participants focused on the center of the screen — a central image appeared and then a different peripheral image gradually faded in. Participants were supposed to click the mouse as soon as the difference between the central patch and the periphery disappeared and the entire screen appeared to be uniform.

Otten and colleagues changed the defining characteristic of the central image in different experiments, varying its shape, orientation, luminance, shade, or motion.

The results showed that all of these characteristics were vulnerable to a uniformity illusion – that is, participants incorrectly reported seeing a uniform image when the center and periphery were actually different.

The illusion was less likely to occur when the difference between the center and periphery was large; when the illusion did occur on these trials, it took longer to emerge.

Participants indicated that they felt roughly equally sure about their experience of uniformity when it actually did exist as when it was illusory. This suggests that the illusory experiences are similar to a visual experience based on a physical visual stimulus.

“The fun thing about this illusion is that you can to test this out for yourself,” Otten says. “If you look up the illusion on www.uniformillusion.com you can find out just how real the illusory experience feels for you.”

“The most surprising is that we found a new class of visual illusions with such a wide breadth, affecting many different types of stimuli and large parts of the visual field,” Otten adds. “We hope to use this illusion as a tool to uncover why peripheral vision seems so rich and detailed, and more generally, to understand how the brain creates our visual perceptual experiences.”

This research was supported by Intra-European Fellowships Marie Curie Grants No. 300184 to Y. Pinto and No. 329134 to M. Otten.

It would be interesting to find out how blind spots in the periphery of glaucoma victims are affected by such illusions.

Since I have some peripheral vision loss, I can agree that the brain attempts to “fill in” the image you see. This is particularly true for very familiar locations, like inside your own home.
However, an unfamiliar and crowded store seems too challenging for the brain to complete your visual image. In these situations, it becomes evident the amount of visual challenge I truly possess. My store visit is brief, since the visual input is quite overstimulating.

In my peripheral vision optical illusion, I have the sensation of something moving, like an animal. We have two cats and one dog, and the shadow movement of a cat is what I see in my peripheral vision, even if the cats are in a different room. That plus my disorientation can be very disturbing.