From the playground to the board room, people often follow, or conform, to the behavior of those around them as a way of fitting in. New research shows that this behavioral conformity appears early in human children, but isn’t evidenced by apes like chimpanzees and orangutans.

“Conformity is a very basic feature of human sociality. It retains in- and out-groups, it helps groups coordinate and it stabilizes cultural diversity, one of the hallmark characteristics of the human species,” says psychological scientist and lead researcher Daniel Haun of the Max Planck Institute for Evolutionary Anthropology and the University of Jena. 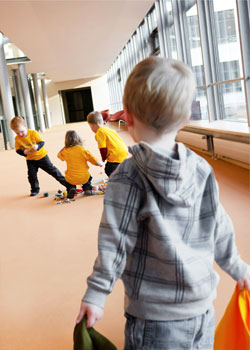 “This does not mean that conforming is the right thing to do under all circumstances — conformity can be good or bad, helpful or unhelpful, appropriate or inappropriate both for individuals and the groups they live in. But the fact is that we conform often and that human sociality would look very differently without it,” Haun explains. “Our research shows that children as young as 2 years of age conform to others, while chimpanzees and orangutans instead prefer to stick with what they know.”

In previous research, Haun and colleagues had found that both human children and chimpanzees rely on the majority opinion when they are trying to learn something new, which makes sense if the group has knowledge that the individual doesn’t. But other research has shown that human adults sometimes follow the majority even when they already have the relevant knowledge, just so that they don’t stand out from the group.

To find out whether very young children and apes would also show this so-called “normative” conformity, Haun and co-authors Michael Tomasello and Yvonne Rekers presented 18 2-year-old children, 12 chimpanzees, and 12 orangutans with a similar reward-based task.

Each participant was shown a box that contained three separate sections, each of which had a hole in the top. By interacting with the box, the participants learned that although the ball could be dropped in any of the three sections, only one of the sections would deliver a treat (peanuts for the apes and chocolate drops for the children).

After familiarizing themselves with the box, the participants then watched while three familiar peers, who had been trained to all strongly prefer the same colored section of the box (different from the participants’ preference), deposited their balls.

The tables then turned and the participant had to decide which section to drop his or her own balls into as his or her peers looked on.

The results revealed that children were more likely to adjust their behavior to match that of their peers than were the apes. Whereas the human children conformed more than half of the time, the apes and orangutans almost always ignored their peers, opting instead to stick with the original strategy they had learned.

Interestingly, the number of peers didn’t seem to make a difference in whether children conformed — children were equally likely to switch their choice whether it was demonstrated by one peer or by three peers.

The clear pattern of conformity among the toddlers suggests that the motivation to fit in emerges very early in humans.

“We were surprised that children as young as 2 years of age would already change their behavior just to avoid the relative disadvantage of being different,” says Haun.

The researchers are currently investigating whether environmental factors, such as institutionalized schooling and different child-rearing practices, impact children’s tendency to conform.

This research was funded by the Max Planck Society for the Advancement of Science.