The research, led by psychological scientist Justin Carré of Nipissing University in Ontario, Canada, indicates that dampened testosterone levels in response to social threats may account for the intervention’s success in reducing aggression.

The Fast Track intervention program teaches children social cognitive skills, such as emotional regulation and social problem solving, and previous research suggests that the program may lead to decreased antisocial behavior and aggression in childhood and adolescence. 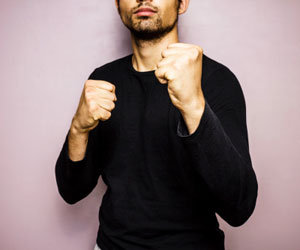 But it wasn’t clear whether the skills that children learned in the program would have impacts that carried over into adulthood.

Carré and colleagues suspected that the program would have long-term effects, and that those effects would be linked to a specific biological mechanism: alterations in testosterone reactivity to social provocation.

To test these hypotheses, the researchers recruited 63 participants from Fast Track schools in Durham, North Carolina. To ensure the participants in the sample were similar demographically, all of the participants were African American men who were about 26 years old.

More than 8 years after the intervention ended, the researchers brought the participants into the lab to play a game, the goal of which was to earn as much money as possible by pressing three buttons: one which accrued money, one which prevented money from being stolen, and another which stole money from an opponent. The participants believed they were playing against an actual opponent, but the game was actually determined by a computer program. The fictitious opponent provoked participants during the task by stealing their hard-earned money.

Participants who hadn’t received the intervention showed an increase in testosterone levels after having their money stolen, but Fast Track participants didn’t, a finding that could explain their reduced aggression.

Ultimately, the findings suggest that Fast Track was successful in reducing participants’ aggression toward a hostile peer in part because it changed the way their neuroendocrine systems responded to social provocation.

Now that they’re confident that the effects of the Fast Track program reach into adulthood, the researchers are interested in determining which specific components of the intervention are most effective in reducing aggression, what neural mechanisms underlie aggressive behavior, and whether these results also ring true for women who have participated in the program.