Working parents often worry about sending their toddlers to daycare. But the results of a new study that tracked almost 1,000 Norwegian children enrolled in daycare indicate that working parents can breathe a sigh of relief: The amount of time children spent in daycare had little impact on aggressive behavior. 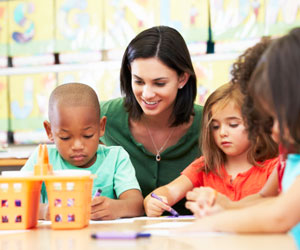 “From a public perspective, our findings are important because they should help ease parents’ fears about the potential harms of early non-parental child care,” says Eric Dearing, lead author on the study and a psychological scientist at the Lynch School of Education, Boston College.

As women entered the workforce in increasing numbers in the 1980s, some child development researchers began reporting that daycare had harmful consequences for children’s social and emotional adjustment. These findings stoked uncertainty and fear among parents, and led to debate amongst researchers in the field.

“Three decades of follow-up studies have only further fueled this debate,” Dearing explains. “While some studies indicate that beginning care early in life and attending for long hours leads to high levels of behavior problems, such as elevated aggression, other studies indicate no risk associated with child care.”

In Norway, most parents have up to a year of parent leave, so children in Norway rarely start attending daycare before they are 9 months old. Because publicly funded child care centers begin enrollment in August, children typically enter child care at different ages depending on what time of year they were born. For example, a child born in August would enter daycare at 12 months old, while a child born in February would be 18 months old by the time August enrollment opened.

The researchers were able to use this as a natural randomizer; a child’s birth month, rather than their parents’ preferences, determined what age they started going to daycare.

Trained assistants interviewed parents of 939 children about time spent in daycare at ages 6 months and 1, 2, 3, and 4 years old. Each year, the child’s daycare teacher reported on aggressive behaviors like hitting, pushing, and biting.

“One surprising finding was that the longer children were in non-parental care, the smaller the effects on aggression became,” Dearing explains.

When the children were 2 years old, those who had entered at earlier ages displayed modestly higher levels of aggression than peers who entered later. Importantly, these differences in physical aggression diminished over time — regardless of how much time children spent in daycare.

“At age 2, there was some evidence of small effects of early, extensive, and continuous care on aggression,” Dearing says. “Yet, by age 4 — when these children had been in child care for 2 additional years — there were no measurable effects of child care in any of our statistical models. This is the opposite of what one would expect if continuous care was risky for young children.”

“If early, extensive, and continuous non-parental care does, in fact, cause high levels of aggression in children, this study suggests that 1 year of parental leave, and entry into high-quality center care thereafter, may help prevent such an outcome,” the researchers write.

Given the evidence that early child care is not associated with problems with aggression, the researchers are turning their attention to the potential positive effects that daycare may have for children’s language development and learning.

It is really a big help for kids to learn at an early age. It will develop their reading skills and vocabularies. They will also be familiar with the alphabet and also the plants and animals.

We offer books to children to teach them a healthy lifestyle. We do seminars and workshop here also! Just visit our website http://www.academyforhealthsuperheroes.com

This study applies to Norway where preschool is very different, preschoolers spend a huge chunk of the day outside which is naturally calming and have better student to teacher ratios. Spending extended time outdoors is not the norm in the US. So using this study for American children’s isn’t true.
There are studies however pointing to the fact that preschoolers in the US do experience higher levels of aggression and behavioural problems from attending preschool too early, it may seem that some children are more affected from a genetic predisposition. There is no doubt that delaying preschool and having a primary loving caretaker has more benefits. https://www.parentingscience.com/preschool-stress.html

I believe you are reading the research wrong. The NICHD study did see increased problem behavior for children spending more time in daycare, however just like this study states, the effects wore off when the children entered formal school. We have to look at other factors that can contribute to this affect. 1. Children at the preschool age display more aggressive behavior in general given cognitive and physiological developments. 2. Daycares provide environments where children are having to compete for resources (toys and attention), so aggressive behaviors may increase for children spending more time in these environments. All that to say, the problem behavior being reported is state and not trait. THe NICHD study reported no differences in attachment to the caregiver for those attending and not attending daycare. Significant effect on problem behavior was moderate for those attending at a young age and for longer hours, suggesting that daycare (when quality is high) is totally fine and that parent can indeed rest assured.

“Each year, the child’s daycare teacher reported on aggressive behaviors like hitting, pushing, and biting.”
One big item missing here is the behavior AT HOME. That’s probably much harder to study accurately but the other side of the story is how kids react to parents after holding in all of the aggression while at daycare. They can be perfect kids with their teachers but then they explode when they get home and parents are no longer their best after a stressful day of work. It has to escape somewhere. Obviously, all kids are a little different but it seems to becoming more common with both parents working. Agree that the pro is language development and learning. It’s hard to decide what’s more important. Being as smart or smarter than your friends and co-workers doesn’t always equal a happier life. But we do our best!