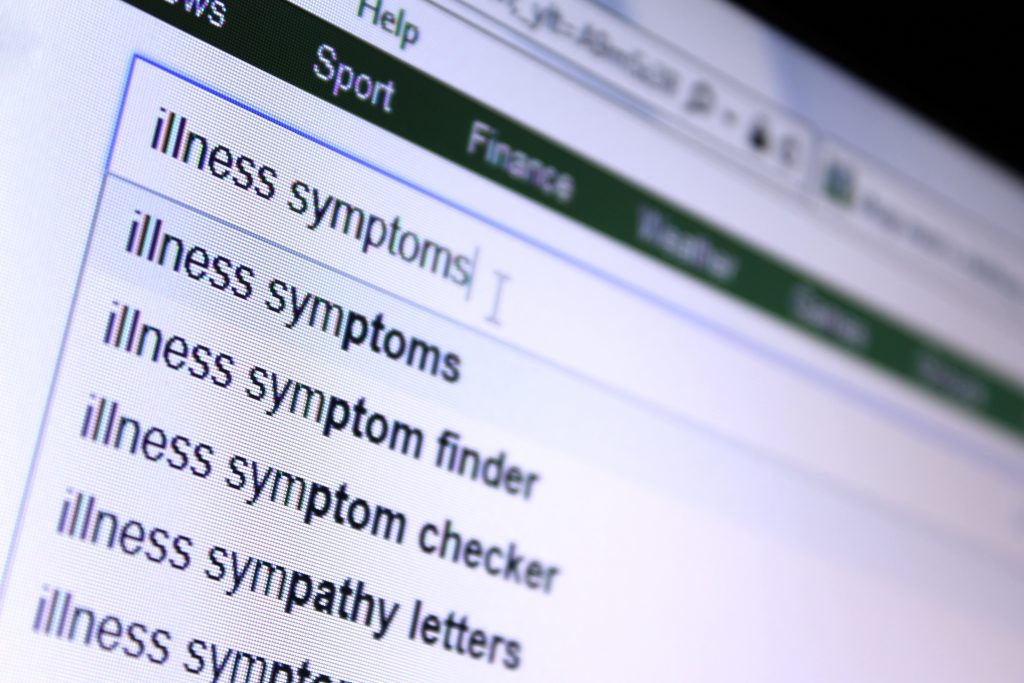 You’ve been feeling under the weather. You Google your symptoms. A half-hour later, you’re convinced it’s nothing serious—or afraid you have cancer. More than 60 percent of Americans get their health information online, and a majority of those decide whether to see a doctor based on what they find. “Wow, this is an era of self-diagnosis,” thought Arizona State University psychologist Virginia Kwan, learning that statistic. How might information accessed online affect individual health decisions?

In a new study, Kwan and her colleagues found that the way information is presented—specifically, the order in which symptoms are listed—makes a significant difference. “People irrationally infer more meanings from a ‘streak’”—an uninterrupted series whether of high rolls of the dice or disease symptoms of consecutively reported symptoms. If they check off more symptoms in a row, the research found, “they perceive a higher personal risk of having that illness.” The study—conducted with Sean Wojcik of the University of California, Irvine, Talya Miron-shatz of Ono Academic College, Ashley Votruba of ASU, and Christopher Olivola of the University of Warwick— appears in Psychological Science, a journal of the Association for Psychological Science.

Surveying cancer-related sites, the researchers discovered that these vary in the way they present common and mild—or “general”—symptoms and more specific and serious ones. To test how streaks affect risk perception, students were presented with lists of six symptoms of a fictional kind of thyroid cancer (“isthmal”). One group got three general symptoms (such as fatigue and weight fluctuation) followed by three specific ones (e.g., lump in the neck); another the reverse order; and the third group a list alternating between general and specific. Participants checked off symptoms they’d experienced in the previous six weeks and then rated their perceived likelihood of having the cancer. The first two orders yielded similar risk ratings. But the ratings were significantly lower when the list alternated.

A second experiment compared lists of 12 or 6 symptoms, this time for a real cancer, meningioma. The three orders were the same as in the first experiment. The effect of order disappeared for the longer, but not the shorter, list—that is, the influence of streaks was diluted when the list was longer. It’s possible that even if a participant checked a series of symptoms—leading to suspicion of disease—boxes left unchecked offered reassurance of to the contrary, the authors think.

The findings could prove useful for public health education, Kwan says. “With certain types of illnesses, people tend to seek medical attention at the latest stage.” Meanwhile, “people also go to doctors asking all the time about illnesses that are very rare.”  To encourage people to seek earlier health screenings, grouping common and mild symptoms might be wise. To limit overreaction, the rare ones should top the list. Reaching particular populations is also a public health challenge. “College students think they are invincible,” says Kwan. “There are ways to structure information to help them realize there are diseases that don’t discriminate.”