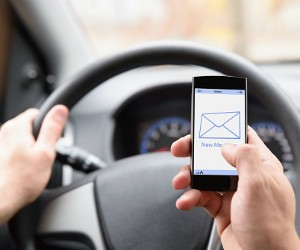 By now, drivers should be well aware of the dangers posed by using a mobile phone while driving. Each day 9 people are killed, and more than 1,153 people are injured in crashes due to driver distraction, according to the CDC.

However, new research shows that simply receiving a call or text—even if drivers ignore it—can be dangerously distracting.

“There is a great deal of evidence that interacting with mobile devices, whether sending messages or engaging in conversations, can impair driving performance,” the researchers write. “Our results suggest that mobile phones can disrupt attention performance even if one does not interact with the device.”

Previous research has clearly shown that distracting thoughts throw off people’s performance on a wide range of tasks, particularly driving. Even if their eyes stay on the road, a missed message may take a person’s mind elsewhere.

“Although these notifications are generally short in duration, they can prompt task-irrelevant thoughts, or mind wandering, which has been shown to damage task performance,” Stothart and colleagues explain.

For the experiment, the research team recruited 166 college students to come to the lab. The students were asked to fill out a demographic survey with basic contact information, including their cell phone numbers.

The students then completed a task, known as the Sustained Attention to Response Task (SART), designed to measure their ability to maintain focused attention. They had to push a key each time a number appeared on the screen, unless the number was a 3.

Though they didn’t know it, the students were randomly assigned to one of three groups: call, text message, or no phone notification. Participants received no instructions about checking their phones during the experiment. As they were completing the attention task, the researchers either called or texted the student’s own cell phone (participants in the control group did not receive notifications).

“We chose this approach because we believe that a large part of cellular notifications’ potential for distraction comes from the fact that messages contain personally relevant content, which would not be true of notifications participants knew were part of an experiment,” the researchers explain.

If a participant did get out their phone during the SART, an experimenter sitting at the back of the room recorded how often they checked it.

“The current study found evidence that cellular notifications, even when one does not view or respond to messages or answer calls, can significantly damage performance on an attention-demanding task,” Stothart and colleagues conclude.

Importantly, when these attention deficits were comparable to findings from other studies where participants actually picked up their phones. This suggests that receiving a notification—even if you don’t respond—can be just as distracting as actually answering the phone or replying to a text.

To get a better understanding of how notifications impact our ability to drive safely, the researchers are planning another experiment that utilizes a driving simulator.

“Even a slight distraction can have severe, potentially life-threatening effects if that distraction occurs at the wrong time,” Stothart said. “When driving, it’s impossible to know when ‘the wrong time’ will occur. Our results suggest that it is safest for people to mute or turn off their phones and put them out of sight while driving.”