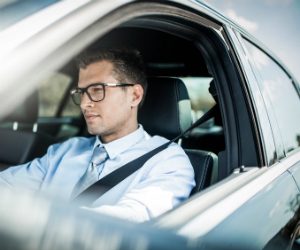 Research has shown that long commutes have a negative impact on many aspects of life, from mental health and blood pressure to divorce rates. Commuting is such a negative experience that, according to a recent analysis conducted by FiveThirtyEight, New Yorkers are willing to shell out an extra $56 a month to cut their commuting time by just one minute.

But preliminary research from a team led by Jon Jachimowicz (Columbia Business School) finds that commuting may actually offer a surprising perk for some people. The findings suggest that employees who used their commute time to think about their professional goals actually improved their commute and feelings about work. In essence, thinking about work—on the way to work—could have the potential to improve your experience at work.

Specifically, the researchers wanted to know whether commuting might actually benefit people who tend to focus on the future. People who spend their downtime planning their next workday might be able to take advantage of their time spent commuting to improve their work performance.

“Lengthy commutes could give individuals an opportunity to relax and think, and thus reduce stress,” the authors write in a recent Harvard Business School working paper.

In a field study, the researchers examined whether using a long commute as a time to think about goals could actually make a long commute less miserable. The researchers recruited a total of 154 working adults through a UK commuting benefits platform. The participants completed a survey at the beginning of the study assessing their daily commuting time, trait self-control, job satisfaction, and emotional exhaustion.

Some participants were then randomly assigned to a goal-directed group, which received a weekly morning text message prompting them to spend some time during their commute thinking about their work: “Many people find it helpful to make a plan of their work day, or week ahead and reflect on how these plans will help them achieve their long-term personal and career goals. For example, what are the strategies you have for the week to be productive?”

Participants randomly assigned to the control group also received weekly text message prompts, but with a different set of instructions: “We are interested in how our employees are spending time during their commute. Please pay close attention to what you do, and what you think about during your typical commute to work each morning. You can do what you normally do during your commute (i.e., listening to music).”

“Prompting commuters to engage in goal-directed prospection while they commute every Monday morning for 6 weeks increased their job satisfaction and decreased their emotional exhaustion,” the researchers report. The control group, in contrast, did not show any of these beneficial effects.

Of course, thinking about work too much can also cause problems. Research conducted by Sabine Sonnentag, a professor of work and organizational psychology at the University of Mannheim in Germany, has shown that mentally detaching from work is an important part of managing stress.