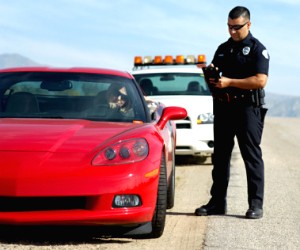 It’s a common belief that driving a red car leads to more speeding tickets and higher car insurance rates. However, research from a 2007 study by Monash University in Australia found that red cars are actually slightly less likely to be involved in accidents compared to other colors (black cars were actually most accident prone). The insurance industry also denies that car color comes into play when setting car insurance rates, though they do look at the vehicle make and model.

New research from an international team of psychological scientists puts the brakes on another common stereotype about red cars: they elicit more aggressive driving.

At least in Western culture, the color red has long been associated with emotions like anger and aggression. Since at least 1942, researchers have observed that red can lead to heightened physiological arousal and aggression whereas colors such as blue or green can have a calming effect.

And a field study led by Nicolas Guéguen of the University of Southern Brittany in France showed that drivers expressed more aggressive behavior towards red cars.

For the study, a male confederate driving on a fairly busy street stopped at a red light at an intersection. When the light turned green, he refused to move—successfully eliciting aggressive responses from many of the cars stuck behind him at the green light.

Two observers tracked how long it took before other drivers started to react, and how many honks or light flashes the experimental car received. The researchers ran the experiment using the same model car in five different colors: red, green, blue, black, and white.

After analyzing reactions from 422 drivers, Guéguen found that red cars elicited significantly more aggressive responses; people honked sooner and more often than with any of the other colors.

Given that the color red has been so commonly linked to aggression, dominance, and other strong behavioral responses, an international team of psychological scientists led by Amparo Díaz-Román and Alberto Megías of the University of Granada wanted to investigate whether red cars are perceived as riskier or more dangerous than other cars.

Díaz-Román and colleagues predicted that seeing red cars, relative to other colors, would elicit faster responses and higher perceptions of risk during dangerous driving scenarios.

For their study, 100 drivers were seated at a laptop and shown a series of videos of several road scenarios involving hazardous driving from cars of different colors: red, black, white, yellow, green, and gray.

Participants were instructed to press a mouse button as quickly as possible to indicate whether they thought the current road scenario was dangerous enough to warrant braking or not. They then assessed the level of risk they perceived in each scenario using a 7-point rating scale.

Díaz-Román and colleagues were surprised to find that red cars didn’t seem to have any particular effect on participants’ decision-making speed or sense or risk. In fact, people had the fastest response times in scenarios with dangerous drivers in black cars.

Differences in the types of tasks used in the two experiments—horn-honking and light-flashing in the first compared to risk evaluation and braking speed in the second—could help explain why the two studies ended up suggesting divergent reactions to red-colored cars. More research is needed to determine whether the proposed “red effect” presents a real hazard for drivers.

I have noticed that people who drive white cars are the most frequent illegal parkers outside my house. It really annoys me how they park so close to my front door that it seems that they own my house. And the vast majority are drivers of white cars.

What a bunch of great information. Thanks for taking your time to sharing this post.

i have definitely noticed that since i bought a new car – my old one was blue and i had it for ten years, i’ve had this red car for two months now and i cannot believe the amount of abuse i get – and i drive the SAME as i drove with the blue car. i get honked at, cut off, shouted at more, etc. And the only difference is the colour car. Unreal. I hardly ever, every got honked at in my blue car. Now, all the time, someone reacts in some way to my driving in my red car. I’ve been driving since I was 17 – decades. It’s the colour car. Incredible.

I can attest to this. I am in a car lease program and have been trying all sorts of colors for 4 years now. Other drivers seem to be more offensive in driving when I’m in a red car compared to other colors. This led me to avoid red cars for my next lease.

I am in VIC, Australia.

thanks for your comment. it’s been over a year now since i’ve had this red car, and i am actually becoming afraid to go out in my car now because i have been bullied that much in this red car. even just half an hour ago, i was out, and i took literally an extra two seconds to go at a green light, and i waved sorry at the driver behind me, and he still honked at me, and not just lightly, he held it for like 2 seconds. obnoxious. i cannot believe how stupid people are.
i didnt choose the colour of my car – it was the only colour available at that dealership. and as i said, it’s so bad now that i am becoming too anxious to go driving. i get some sort of sh*t off someone for doing nothing, around 30% to 40% of the time now when i go out. it’s unreal. i regret buying this colour car. never again.

I have noticed since buying a darker vehicle(Tahoe), dark blue, drivers on the feeways almost ignore you or forget that you are there. They then change lanes into you or ride the lines separating the lanes. I had a brighter blue colored yukon and this never happened

I feel that the darker colors are harder to see at night . Especially the old red and black green . Yes the candy apple red is easier . But I notice this everyday . Lighter color cars are easier to see !!!!

Differing conclusions on the link between video games and aggression may come down to how research teams interpret and report their statistical analyses, rather than the underlying data.