News > Minds on the Road > Safe Crossings: The Power of Eye Contact 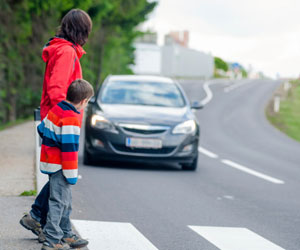 It can be a dangerous world for pedestrians. Studies on French roads report that nearly 60% of drivers do not stop at all for pedestrians crossing the street at designated crosswalks.

New research suggests that pedestrians may have a better shot at crossing safely if they make direct eye contact with oncoming drivers.

Decades of research have shown that eye contact has a powerful effect in social interactions. People are far more likely to comply with requests — for example, donating money — when the person making the request looks them in the eye. Experiments on eye contact completed in the 1970s demonstrated that drivers stopped more than twice as often when hitchhikers looked them directly in the eye.

For the study, four student confederates (two men and two women) were stationed at four different pedestrian crosswalks along city streets. The confederate was instructed to wait at the sidewalk until a car approached.

If a driver stopped, the confederate crossed the street and walked away for 10 seconds before returning to the crosswalk to repeat the procedure. Each confederate tested 10 drivers before switching experimental conditions.

Overall, the research team was able to obtain data from 2,560 drivers (1,488 men and 1,072 women). As predicted, pedestrian eye contact seemed to have a strong influence on driver behavior.

Without eye contact, about 55% of the drivers did not stop at the pedestrian crossing. However, when pedestrians stared directly at the driver’s eyes, about 68% of drivers stopped.

In both experimental conditions, the researchers found that gender played a significant role in whether or not a driver stopped; drivers stopped more often for female pedestrians (65%) than for male ones (58%). Male drivers were also more likely to stop when a male pedestrian stared at them (30%) than when a female pedestrian did (20%).

“The results of the present study confirmed our hypothesis: at pedestrian crossings significantly more drivers stop to permit to a pedestrian to cross the street when he or she looks the driver in the eye,”

However, future research will be needed to determine exactly why eye contact plays a role in this behavior. In some circumstances, direct eye contact can reflect status and dominance. In this study, “eye contact could have been perceived as a nonverbal form of order to stop.”

“Our results conducted in a field setting clearly support the assumption that making eye contact with a driver while waiting at the pedestrian crossing could be a relevant way to increase driver stopping behavior and by extension the safety of the pedestrian,” the researchers write in the journal Safety Science.

News > Minds on the Road > Safe Crossings: The Power of Eye Contact

Cyclist are taught the same….the rule is that if a driver dosent make eye contact , you assume he dosent see you. I believe eye contact also pwesonalizes someone, meaning others (drivers in this case) are forced to recognize the pedestrian as a person.

I’ve found this to be true. When I stare at the approaching driver, they stop the vast majority of the time.