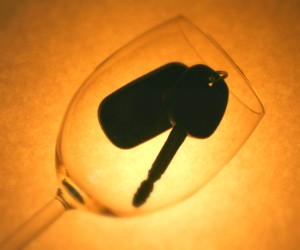 “I recognize the seriousness of this mistake. I’ve learned from this mistake and will continue learning from this mistake for the rest of my life,” said 22-time Olympic medalist Michael Phelps during his first drunk driving sentencing hearing in 2004.

Phelps was convicted of drunk driving again in 2014 after police witnessed him crossing the double yellow line while driving 84 miles per hour in a 45-mph zone. According to police records, Phelps’s blood alcohol level was nearly twice the legal limit at the time of his second DUI arrest.

Drunk driving accounts for 35-40% of all driver fatalities in Canada and the United States, and drunk driving crashes kill more than 10,000 Americans every year. One challenge to preventing these needless deaths is stopping repeat DUI offenders: An estimated 30% of DUI offenders will continue to drink and drive, even after being arrested and punished.

A team of Canadian psychological scientists is looking at the personality, cognitive, and neurobiological factors that contribute to this reckless behavior. By better understanding the patterns of emotional processing and risk perception shown by repeat offenders, the researchers hope to design interventions that more effectively target these subgroups of dangerous drivers.

“Surprisingly, these drivers usually don’t consider themselves as risk takers,” lead author Thomas G. Brown of McGill University said in a press release. “If drivers don’t believe they are risky, they will not accept the need to change. On the other hand, if we and they don’t understand their behavior, how can they be expected to change it effectively?”

Brown and colleagues recruited four groups of male drivers who had different criminal histories: 36 men with at least two convictions for drunk driving (DWI group); 28 reckless drivers with at least three speeding violations in the past two years (speeders); 27 men with arrests for both DUI and speeding (DWI-speeders); and 47 low-risk drivers with no history of serious traffic offenses (control group).

All participants completed a battery of personality and impulsivity assessments, ranging from a Big Five personality measure to an executive control task that assessed their sensitivity to punishment and reward. Participants’ cortisol response, a hormonal reaction to stress, was measured by collecting saliva samples before and after they completed a timed mental arithmetic task previously shown to elicit stress.

The researchers found that different subgroups of risky drivers had distinctive neurobiological profiles. Compared to the low-risk control group, speeders were prone to making decisions based on thrill-seeking and a need for high levels of stimulation. Repeat DWI offenders, in contrast, had the lowest level of risk-taking behavior while sober.

“One possibility in line with the present results is that once heavy drinking has occurred, more impulsive drivers are more vulnerable to alcohol’s disruptive effects on the behavioral control mechanisms required to avoid DWI,” the researchers explain.

All of the dangerous driving groups exhibited significant blunting in their cortisol stress response compared with the control group. Cortisol, along with other stress hormones, influences cognitive processes that range from risk assessment to encoding emotional memories. These results suggest that dysregulation of the body’s cortisol response could act as a neurobiological marker for risky driving behavior.

“Along with alcohol’s acute, generally negative impact on memory encoding, this effect could further contribute to the failure of common deterrence approaches aimed at drivers following a DWI conviction (e.g., severe financial and legal penalties) to prevent later recidivism,” the researchers write.

Interventions designed to improve drivers’ recall of the negative consequences of drinking and driving may be more effective for preventing drunk driving.

“Relative to the other [risky driving] profiles considered here, the profile exhibited by group DWI may be the most amenable to interventions that aim to augment recall of the negative consequences of DWI behavior and pre-emptively decouple alcohol use from driving,” the researchers conclude. “In the case of drivers with uncontrolled alcohol use disorder, however, specialized alcohol use disorder treatment seems unavoidable.”

Re: “Interventions designed to improve drivers’ recall of the negative consequences of drinking and driving”

Why is the intention here to reinforce negative consequences instead to positive ones (loss aversion vs punishment orientation)? This seems to me to be the wrong approach.
Current DWI programs aimed at eliminating recidivism are outdated and ineffective. There are already devices that can be installed in car that would prevent a driver from starting their car if they have been drinking. If these devices were required for first time offenses individuals would learn to alter one’s behavior around drinking in a more positive way.

The devices that you describe (interlock for example) are great for reducing drunk driving while offenders are on parole or probation. They have not been shown to reduce recidivism after their removal. They thus do not have lasting therapeutic effects. Psychotherapeutic approaches are the most effective for producing internal, long-lasting change. The goal of this project was to explore how different types of offenders might respond differentially to treatment. Some people may respond better to loss aversion, others punishment orientation.

Also: “The Centers for Disease Control and Prevention (CDC) discovered that on average, 4.2 million Americans admitted to driving drunk at least once in the past month, which fans out to around 121 million drunk drives per year.”

Should this be put into some perceptive then. There are different penalties to steal a candy bar and stealing a car. Do we need to consider the difference between being impaired in a 25 MPH zone (which might be the same as being 70 years old and driving in terms of reaction times)) or being twice the legal limit on the interstate and going 70 MPH?

Circumstances of the crime (e.g., level of intoxication) are frequently taken into account in sentencing. As a rule, this would be problematic; perhaps children are at play in the 25MPH zone?

Context is very important. The typical drunk driver is pulled over on a quiet road at 1 am. That school zone you’re talking about isn’t being policed for drunk drivers at 3 pm. Let’s be real: this is a gold mine for police departments, not a public safety measure. If it were about public safety every car could have a breathalyzer mechanism built in and we’d eliminate 100% of drunk driving at low cost relative to the alleged “$132 bn problem.”