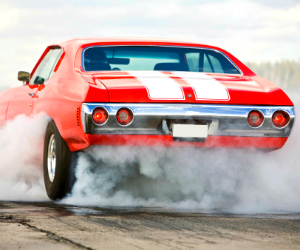 Research has long shown that children’s behavior can be influenced by what they see in movies, TV, and video games. In light of this, the Motion Picture Association of America (MPAA) considers factors such as violence, sex, foul language, smoking, and drug use when assigning ratings for movies so that parents can make informed decisions about what their children watch.

A newly published study provides evidence indicating another on-screen behavior that could be added to this list: reckless driving. The study shows that children exposed to reckless driving in movies may end up emulating that behavior once they’re old enough to borrow the keys.

In fact, car crashes are the leading cause of death for teens in America, costing 2,650 lives in 2011 and leading to over 292,000 injuries according to the CDC.

A team of researchers led by psychological scientist Evelien Kostermans of Radboud University in the Netherlands surveyed 1,630 American adolescents over 6 years. The kids were 10 to 14 years old when they became involved and they were surveyed a total of five times over the course of the study. Each participant completed the final survey after she or he had had a full year of driving experience.

The researchers also analyzed top box office hits that were released in the 5 years prior to the baseline survey in 2003 for scenes of reckless driving. The adolescents were asked which of the movies they had seen out of a unique list of 50 movies drawn from the pool.

Sure enough, parents may want their kids to skip The Blues Brothers and Bullitt.

The researchers found that just as the glorification of smoking in movies is linked with children’s likelihood of smoking later on, exposure to reckless driving in film was associated with more dangerous behavior when the adolescents got behind the wheel.

“This study demonstrates a direct long-term relation between early exposure to reckless driving in movies and reckless driving behaviors among US adolescents with driving experience,” the researchers assert in the journal PLoS One.

Kostermans and colleagues did not find an association between film exposure and inattentive driving.

The researchers speculate that more overall screen exposure may have “stimulated reckless driving through exposure to a variety of other risk-taking behaviors such as excessive drinking, movie violence and their cumulative impact on sensation seeking tendencies.”

Based on these findings, Kostermans and colleagues argue that parents should be made aware of the potential effects that scenes of reckless driving may have on adolescents.

“Parents should understand that adolescents model behaviors they see in movies and should restrict children and adolescents in the number and types of movies they are allowed to watch each week,” they write.

Movie smoking and violence are incorporated into ratings systems while reckless driving is not— but researchers suggest that maybe it should be.