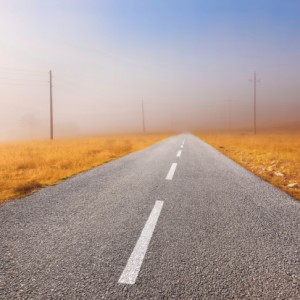 Most people believe that the dashed lines painted down the middle of a road are about 24 inches in length. And they’re off by about 8 feet.

US federal guidelines dictate that the dashed lines separating traffic lanes or indicating where passing is allowed run 10 feet in length. But a recent study showed that people grossly underestimate the length of those lines, and thus could be misjudging distances as they drive. That means they could be driving too fast.

Psychological scientist Dennis Shaffer began heading up this research as a graduate student in the 1990s and continued it while on the faculty at Arizona State University and finally at The Ohio State University, where is serves as an assistant professor. The series of experiments involved a collective 400 college students over the year.

In the first experiment, he and his colleagues gave participants a written test in which they were asked how long they believed the lines and the spaces in-between lanes to be. In a second experiment, the researchers took a piece of paper that was the exact size and shape of a dashed line and taped it to the ground. Participants stood either 60 or 120 feet from the line, and looked at it at an angle close to their line of sight, as they would see it if they were driving down a road. In the third experiment, participants sat in the front or rear passenger seat of a car, and were asked to study the lines and spaces while a researcher drove down an actual road at either 25 or 60 miles per hour.
In all three experiments, most of the students, when asked to guess the length of the lines, answered 2 feet.

At each university, he and his colleagues measured lines on a variety of nearby roads. Over those years, the federal guideline for line size shrank from 15 feet to 10 feet. Wherever the researchers went, they found all lines to be close to the federal guidelines of the time. In Arizona in 2000, for instance, some lines were 16 feet long instead of the expected 15.

But even back then — when the federal guideline was 15 feet — people still thought of lines as measuring only 2 feet.

Why are these erroneous estimates for consistent? Shaffer suspects that the miscalculations have something to do with how our brains perceive geometry. Engineers design roads, buildings, and public spaces using Euclidian geometry — the system of lines and angles first described by the ancient Greek mathematician Euclid. But this study and previous ones suggest that our brains perceive objects in a non-Euclidian way.

As a possible explanation for this misperception, Shaffer pointed to the concept of “size constancy”— in which we see an object as being the same size, no matter how close or far away it is. Scientists have demonstrated this phenomenon in a number of contexts. In a study published in Psychological Science, for example, researchers found that people tend to perceive their dominant hand as staying relatively the same size even when its magnified.

Even though lines appear to expand as a car passes by, drivers can’t safely notice that effect. Rather, the first line we can comfortably look at while driving safely is some 120 feet ahead — the fourth line ahead on the road. So perhaps we think that all lines are as small in reality as that one faraway line appears to be.

These line misperceptions have real implications for traffic safety. The empty spaces between each line measure 30 feet. So every time a car passes a new dashed line, it has traveled 40 feet. But in this study, people consistently judged the lines and the empty spaces to be the same size — 2 feet. This means drivers are covering more ground than they perceive, and are thus underestimating their speed.
The study appeared in the journal Attention, Perception & Psychophysics.

I always thought the stripes were about eight feet in length. Too dangerous to get out and measure one. This was the safest way to ascertain the exact length.

The photo at the head of the article is of a road that doesn’t comply with the standards then? Or indeed any variation discussed in the article. In that picture the lines are slightly longer than the gaps, whereas the gaps are supposed to be 3 times longer than the lines. This picture casts doubt on the report because when they surveyed the public how do they know that those people don’t live near non standard roads like this? In the picture provided I’d estimate the lines are maybe 8 feet with a 6 foot gap. That means I’d drive 3 times too slow on that road if I assumed 40 feet was the periodicity of the line pattern. So the road shown must be super safe according to their conclusions.

The main conclusion I have drawn from this page is that road markings don’t follow federal standards, which is what you’d expect because only interstates are federally funded. The researchers used “nearby roads” which don’t sound like interstates.

My main conclusion I drew from this is that it’s most likely a stock photo they found somewhere and didn’t intend for people’s analysis of the article to be based off of it.

My experience has taught me that a large majority of people have very poor skills when it comes to estimating anything involving motion— speed, distance, closure rate, etc. I believe most people couldn’t even tell you how long one foot is, +/- 25%.

The History Guy posted a YouTube video on the history of lane markers. He addresses some of the issues here but goes into much more detail about how they came to be and how they were standardized.