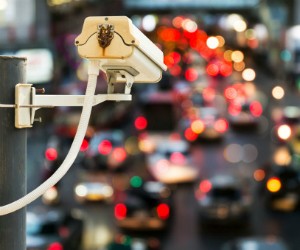 Love them or hate them, a new study finds that speed cameras really do help stop drivers from speeding—particularly when the camera is hidden.

Drivers may not appreciate getting a ticket, but speeding is one of the biggest contributors to traffic fatalities. Statistics from the National Highway Traffic Safety Administration cite speeding as a factor in 29 percent of motor vehicle crash deaths in the United States.

One documented issue with speed cameras—dubbed the “kangaroo effect”—is that drivers tend to slow down as they approach a speeding camera, and then speed up again after they’ve passed it. This can then increase rear-end collisions as drivers slow down suddenly to avoid a speeding infraction.

This problem arises from the fact that drivers are aware of exactly where typical “overt” cameras are located. Covert speeding cameras, on the other hand, are camouflaged, ensuring drivers are uncertain about the camera’s exact location.

To find out whether speeding cameras really help or hinder driver behavior, psychological scientists Hadas Marciano, Pe’erly Setter, and Joel Norman of Haifa University used a driving simulator to put the cameras to the test.

Fifty-eight licensed drivers (29 women and 29 men) were assigned to a driving simulator scenario that either had hidden or overt speeding cameras. Throughout the scenario, the driver’s speed was measured and documented at twenty predefined locations along the simulated road. Participants received a cash reward for completing the study, but if they were caught speeding they’d have to forfeit a small part of their total reward. However, completing the scenario quickly could also win them a monetary bonus.

According to Marciano and colleagues, their results suggest that commonly used overt cameras may not be the best way to put the brakes on speeding.

Overall, the results of three driving sessions showed that covert cameras prevented speeding far better than overt ones. Drivers in the overt camera group exceeded the speed limit most the time, except for when the camera was directly in view. They also exhibited the kangaroo effect across all three driving sessions, widely varying their speed to avoid detection by the cameras.

On the other hand, those in the covert camera group rarely exceeded the speed limit and drove at a consistent law-abiding speed throughout the experiment.

The takeaway from this experiment is that speed cameras help prevent speeding—as long as drivers don’t anticipate the location of the camera.

“All of this suggests that overt cameras are not optimal compared to covert cameras, as they do not prevent drivers from exceeding the speed limit, except for in proximity of the cameras’ locations,” the researchers write in the journal Accident Analysis & Prevention.