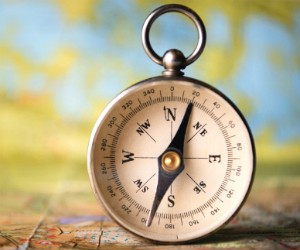 Some people just seem to have an innate sense of direction; they never need to ask how to get somewhere or forget where they parked. Then there’s those of us who would be utterly lost in our own neighborhood without the help of GPS and turn-by-turn directions.

A team of psychological scientists from Tufts University and the U.S. Army may have found one way to improve a shaky sense of direction: applying an electric current to the brain.

The research team, led by Tad T. Brunyé, found that volunteers who started off the experiment with poor navigation skills showed a significant improvement after receiving a dose of low-current electricity delivered to the scalp, a technique known as transcranial direct current stimulation (tDCS).

Previous studies using tDCS have found that it can temporarily cause varying effects in people that range from improvements in memory, creativity, attention, and even easing symptoms of depression.

While it’s not understood exactly how tDCS works, it’s thought that low doses of electrical stimulation can increase the excitability of neural circuits, making it easier for neurons to fire.

Decades of research have identified specific structures in the right hemisphere of the brain as being particularly important for navigation and spatial memory, including the hippocampus and parahippocampus. The researchers hypothesized that delivering tDCS to these right temporal brain regions could enhance people’s navigation skills, helping people improve their sense of direction and spatial memory.

For the study, a group of 32 male university students volunteered to undergo tDCS while their navigation skills were tested.

During the first visit to the lab, the volunteers completed a series of measures of their spatial reasoning skills and sense of direction. They then completed a navigation task without tDCS in which they were asked to make their way through a virtual town on a computer screen while attempting to locate a sequence of 10 landmarks, such as finding their way from the bank to the library.

During the second and third sessions, volunteers completed the navigation task while receiving either a very low “sham” dose of electrical stimulation or a higher “working” dose of tDCS in a counterbalanced order (0.5 versus 2.0  mA).

To test for changes in spatial memory, volunteers were asked to sketch a map of the virtual town on a blank piece of paper after completing the task.

As expected, volunteers who received stimulation of the left side of the brain or the very low dose of tDCS showed no significant improvements in their sense of direction or their spatial memory.

Interestingly, tDCS delivered to the right side of the brain resulted in some unexpected findings; individuals with a poor sense of direction at baseline showed significant improvement, navigating between landmarks much more efficiently.

“Brain stimulation in individuals with a low sense of direction may result in reduced excitatory thresholds in neural networks responsible for acquiring spatial knowledge during navigation, enhancing otherwise suboptimal performance,” the researchers write.

The researchers note that additional research using larger samples is needed to find out more about how tDCS affects particular areas of the brain in specific tasks.

I have a very poor sense of direction. Is there anything available like this documented experiment for me today.