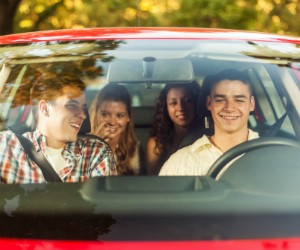 Teen drivers are far more likely die in car accidents when they drive with friends. According to a study by the AAA Foundation for Traffic Safety, a teen driver’s risk of death per mile driven increases by 44% with one teen passenger in the car and quadruples with three or more teen passengers. As a result, many states now have laws limiting the number of passengers allowed in a car with a teen driver.

Crash data has long shown that driving with peers dramatically increases the odds of fatal crashes for teens, particularly males, but researchers have been unable to pinpoint exactly why some teens’ driving behavior spins out of control in the presence of their friends.

A recent study by a team of psychological scientists from the Eunice Kennedy Shriver National Institute of Child Health and Human Development at NIH, the University of Michigan, and the University of Sherbrooke in Quebec suggests one possible influence: teen passengers’ attitudes about driving.

The results of the study, published in the journal Health Psychology, showed that male teen drivers took more risks in a driving simulator when they thought that their passenger approved of reckless driving.

“In the driving context, the perception that one’s friends drive in a risky manner is associated with higher rates of speeding and other risky driving,” writes lead author Bruce G. Simons-Morton. “Accordingly, behaviors such as risky driving may be more likely to occur when perceived as preferred or expected by important others.”

For the study, a group of 66 recently-licensed male teens were randomly assigned to drive with either a risk-accepting or risk-averse peer passenger (actually a young-looking research confederate) in a driving simulator.

The participant was then told that he had been randomly selected to be the driver for the experiment, but that the confederate would be allowed to try out the driving simulator just for fun before the experiment began. In the risk-accepting condition the confederate drove aggressively without putting on a seatbelt, and in the risk-averse condition he put on a seatbelt and drove as safely as possible.

The study participants then completed both a solo trip in the simulator and a trip with the confederate as their passenger. Risky behavior was measured by tracking whether the driver stopped for red lights, and how much time was spent in the intersection during a red light.

Relative to their solo driving scenarios, teens took significantly more risks—running more red lights—when they had a passenger with them. However, their behavior was far more reckless when driving with the risk-accepting passenger compared to the risk-averse passenger.

Even though they were driving with a stranger, the teens altered their driving behavior seemed to conform to the passenger’s attitudes about risky driving.

The fact that the confederate in the study didn’t pressure the teens to drive in any specific way suggests that the findings may actually underestimate the true effects of peer influence on teens’ driving, the researchers conclude.