News > Minds on the Road > Does Punishing Speeders Prevent Speeding? 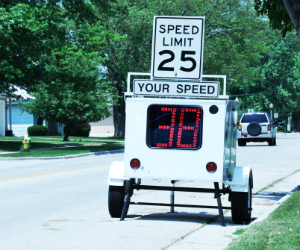 Speeding leads to more car accidents worldwide than almost any other behavior behind the wheel. The World Health Organization (WHO) has cited speeding as the main cause of nearly 30% of all serious or fatal crashes across the globe.

Despite the risks of death or injury, people often admit to intentionally speeding. International studies have found that between 66% and 85% of drivers admit to exceeding speed limits. Although measures like speed traps and red-light cameras aim to cut down on speeding, it’s unclear whether these penalties actually improve behavior on the road.

A team of Spanish researchers led by Francisco Alonso looked at whether current speeding penalties actually convince people to change their behavior.

The researchers used a telephone-based survey to ask 1,100 Spanish drivers about their opinions on speeding and the effectiveness of current speeding penalties. Participants were asked how frequently they engage in speeding, why they speed, and whether they’ve ever been punished for speeding.

The researchers also found that most people didn’t think they’d get caught speeding. When asked to rate the probability of getting a speeding citation on a scale from 0 to 10, drivers rated their chances of getting caught as a 3 on average.

The team’s findings indicate that penalizing speeders may be effective at convincing drivers to change their ways. For example, 60% of the drivers who had been penalized for speeding said that getting caught influenced their future behavior. Alonso suggests that increasing police enforcement and the number of speeding cameras may be effective tools for changing driver behavior and cutting down on speeding.

“In general terms, it was concluded that drivers who speed are completely aware of the fact that they are breaking the traffic rules,” Alonso and colleagues write in the American Journal of Applied Psychology. “Secondly, it was also concluded that drivers are not aware of the risks of speeding since they justified their behavior by saying the speed limits are too low, the conditions on the roads allow doing so, or that it was a habit.”

Alonso and colleagues say that this research could also be useful for designing interventions that limit speeding by better justifying the reasons for current speed limits. For example, the main reason people in the study cited for avoiding speeding was the risk of getting into a crash or an accident. Researchers who design interventions to prevent speeding may want to increase their focus on making drivers more aware of the increased risks of getting into an accident or getting a citation for speeding.

News > Minds on the Road > Does Punishing Speeders Prevent Speeding?