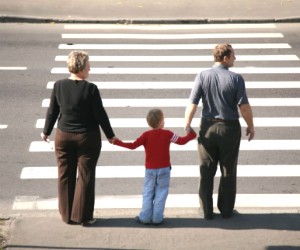 On average, a pedestrian in the US is killed in a car-related accident every 2 hours and injured every 7 minutes, according to data from the Centers for Disease Control and Prevention (CDC). But children aren’t the ones at greatest risk of a deadly collision with a car– seniors are.

A CDC analysis of pedestrian traffic deaths from 2001-2010 concluded that the risk of death actually increases with age. Children under age 15 had the lowest risk of dying as the result of a collision with a vehicle; people over the age of 75 were more than twice as likely to be killed by a car compared to pedestrians overall.

To find out more about pedestrian decision-making as people age, a team led by psychological scientist Aurélie Dommes of the French Institute of Science and Technology for Transport (IFSTTAR) built a realistic street-crossing simulator in the lab.

A large-scale projection system on two walls showed a two-way street with oncoming cars approaching from both directions at varied speeds. Just like a real crossing, participants had to look both ways in order to gauge whether they had enough time to make it across the street without a collision.

The researchers tested a total of 84 participants from three age groups in the simulator: young adults ages 19 to 35, older adults ages 62 to 71, and seniors 72 to 85 years old. Participants’ head motion as they checked for traffic, their decision to cross, and their walking speed were recorded for each crossing.

As expected, the oldest participants were significantly more likely than the other groups to misjudge oncoming traffic, resulting in a “collision” with an oncoming car.

Older pedestrians tended to pay more attention to the lane close to them, while ignoring the traffic in the far lane. In contrast, younger pedestrians were better able to focus on both lanes of traffic before deciding whether or not to cross the street. In addition, seniors had more difficulty than younger pedestrians compensating for an unsafe crossing decision by walking faster.

Dommes and colleagues suspect that age-related declines in perceptual and cognitive functioning make it difficult for seniors to fully process both lanes of traffic. As a result, older pedestrians focus too much on the distance of the cars nearby without properly accounting for the distance and speed of cars in the far lane.

“Because sensorimotor performance becomes cognitively more demanding with advancing age, the control of posture and gait while walking could also contribute to the too high attentional requirements of the two-way street-crossing task for old[er] pedestrians, who suffer from limited attentional resources,” Dommes and colleagues write in the Journal of Safety Research.

This age effect is also in line with the French crash statistics indicating that people over 75 make up the most vulnerable pedestrian group, accounting for more than 37% of fatalities despite representing less than 9% of the population.

To cut down on pedestrian fatalities, cities can increase the number of marked street crossings and make crossing times longer at busy intersections. Including more traffic islands can also help lighten the cognitive load of crossing a busy street by splitting the task into two stages.

The National Academies of Sciences, Engineering, and Medicine are initiating a consensus study on generational issues in the workforce. APS Members will play a central role in the leadership of the study. The endeavor will evaluate the behavioral science and business management and literature on generational attitudes and behaviors. More

Frustrated drivers are more likely to lash out aggressively at vehicles they perceive as having a lower social status. More

As we get older, does our work become more satisfying? New research illuminates an intriguing conundrum: Job satisfaction tends to improve as we get older but also tends to decrease the longer we stay at a particular job. “We demonstrated that age and tenure have opposite relationships with job satisfaction More