The US Senate failed yesterday to pass legislation that would amplify women’s ability to sue their employers when they earn less than male colleagues for equal work. Democrats argue that the existing laws aren’t enough, pointing to figures showing women making 77 cents for every dollar that men earn. Republicans opposed the measure, arguing that the pay-gap figures are misleading and that federal law already makes pay discrimination illegal.

But beneath the statistics and political debate are some psychological factors that appear to perpetuate the pay inequities no matter what the law says. In a study published a few years ago, a team of researchers showed that people tend to unconsciously equate males with wealth, which may unintentionally lead to higher pay for men than for women. 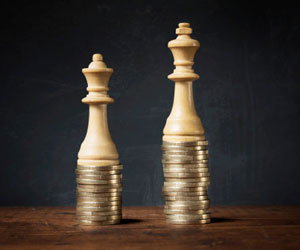 In the study, Melissa Williams, then a postdoctoral fellow at Stanford University and now a professor at Emory University, led a series of experiments aimed at measuring how people’s gender stereotypes influence their assumptions about salary levels for various jobs. Williams and her colleagues posited that people’s tendency to automatically associate maleness and wealth would lead them to make discriminatory salary judgments outside their awareness.

In the first experiments, the researchers had male and female participants engage in exercises in which they estimated the salaries of men and women employed in various occupations (e.g. “Harold is a physician. Please estimate his annual salary.”) As predicted, participants generally estimated higher salaries for male employees compared with female employees, even for identical job titles.

But in the final phase of the study, the researchers looked at how salary judgments are influenced by buried biases.

For this experiment, the scientists used a series of Implicit Association Tests (IATs), a computer-based tool that measures the strengths of mental associations we make between categories. In one variation, an IAT might capture differences in participants’ response times when shown a single word, say suffering, and assigned to match it with one of two contrasting words, like pleasant and unpleasant.

The researchers then asked the participants to estimate salaries for various job titles, including bartender, attorney, bus driver, and veterinarian, alternatively showing male and female names assigned to those roles.  Afterward, the participants filled out a questionnaire about their perceptions on the national wage gap.

As in the earlier experiments, the participants, both male and female, estimated higher salaries for the jobs when held by men rather than women. And almost all of the participants said their knowledge or opinions about the national wage gap had no influence on their estimates.

But the IAT results were particularly telling. The researchers found that participants were significantly faster in responding (meaning they made stronger nonconscious associations) when male-related words, as opposed to feminine words, were associated with wealth-related words. This also occurred, to a lesser extent, when people responded to gender-specific words associated with competence words, although not with the status or deservedness words.

In reporting on their findings in the journal Psychology of Women Quarterly, Williams and her colleagues concluded that the male-wealth stereotype is a major force behind gender differences in salaries. And this effect appears to occur at least partially outside of our awareness. Even if we believe women deserve the same pay as men for equal work, we appear to implicitly associate high salaries with men.

This unconscious association could lead even employers striving for gender-equitable pay structures to offer higher salaries to male job applicants without realizing how much the candidate’s gender influenced that decision, the scientists said.  They also warned that the implicit value assigned to men may occur outside of the labor context, seeping into calculations of life insurance rates, death benefits paid to survivors of deceased soldiers, and other decisions in which lives are quantified in economic terms.

“As a consequence of the male-wealth association, otherwise well-intentioned individuals may find themselves unintentionally applying a stereotype and simultaneously perpetuating wage disparities between women and men,” they wrote. “But by recognizing and revealing potentially harmful stereotypes such as the belief that money is masculine, we can begin the process of dismantling them.”

News > Minds for Business > Wage Disparity and the Masculinity of Money

The IAT may help identify and provide additional support to individuals at risk of attempting suicide. More