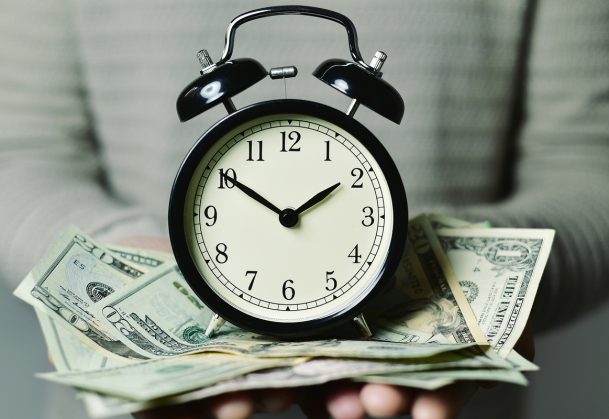 A new study demonstrates that the way we’re paid—not just how much—can exert a disturbing influence on our willingness to recycle.

Even though recycling a soda can or a piece of paper takes just a few seconds, psychological scientists Ashley Whillans and Elizabeth Dunn of the University of British Columbia found that people are far less likely to engage in these sorts of “green” behaviors when they are paid by the hour rather than salaried.

“We show that people are less likely to engage in environmental behavior if they are paid by the hour, a form of compensation that leads people to see their time as money,” Whillans and Dunn write in the journal Organizational Behavior and Human Decision Processes.

In their first study, Whillans and Dunn analyzed data from a nationally representative sample of over 10,000 individuals from 5000 British households. The researchers compared the pro-environmental behavior of 2,802 hourly paid respondents and 4,128 salaried respondents.

As predicted, hourly workers reported less frequent engagement in environmental behaviors compared to salaried workers, even after a number of demographic factors were taken into account.

In another study, 52 students were asked to complete identical calculations of future income in a year. Half the students were explicitly asked to think about their time as money through an hourly wage, while the control group simply completed the exercise.

The students were then asked to cut a series of shapes out construction paper. The experimenter mentioned that participants could discard their scrap paper in a trash bin inside the room or a recycling bin just a few feet outside the room.

Students prompted to think of an hourly wage were far less likely to reach for the recycling even though it only took an extra 3 seconds to recycle the scrap paper.

However, Whillans and Dunn found that the detrimental effect of seeing time as money could be eliminated when people saw environmental behavior as something they could benefit from themselves.

A total of 179 participants completed a task in which they were asked to imagine themselves as a consultant for a fictitious company. Half of the participants were assigned to a billing condition in which they charged $0.25 for each minute of their time. Those in the control condition simply completed the task.

Participants then took a true-false quiz in which environmental behaviors were framed as either self-beneficial (e.g., staff who carpool get a premium parking spot) or generally altruistic (e.g., driving a car is good for the environment).

Finally, the volunteers completed the paper cutting task with the option to either recycle or throw away their scraps.

When pro-environmental behavior was framed as a generally altruistic act, 45% of those in the billing task recycled their scrap paper, compared to 73% of participants who completed the control task. However, when environmentally friendly behavior was framed in self-beneficial terms, there was no significant difference in recycling rates between the billing group and the control group.

Although the researchers acknowledge that most of the effects they found were relatively small, they emphasize that even minor shifts in behavior can lead to meaningful consequences. For example, if each of the 75 million hourly workers in the US recycled an additional pound of paper each year, 28 million trees would be saved.

“Reminding people how much money their time is worth can have far-reaching effects on the decisions they make about their time, pointing to a novel explanation for the limited impact of environmental campaigns on everyday behavior,” the researchers conclude.

One issue with this study is the assumption that recycling is actually beneficial to the environment. It sounds a bit counterintuitive, but as scientists, we shouldn’t accept the assumption that “recycling is beneficial to the environment, therefore those that don’t recycle aren’t being good to the environment.” The above study only addresses a willingness to recycle, however, the question is, what are the costs involved with recycling? Who actually benefits? Do resources actually get saved in the net? Recycling paper might save a tree, but a tree is a renewable resource; why resources were used (i.e. fuel for the recycling plant, environmental impact of building recycling plants, vs. the impact of biodegrading paper on the earth.) My point isn’t to bash recycling, it’s to establish that assumptions, even “common sense” assumptions shouldn’t be given a pass in terms of scientific rigor. The above studies might conclude something about the willingness to recycling, but do those studies actually uncover anything about the overall net gain or loss of scarce resources? How about the environmental impact of recycling? Any citations within the above studies regarding that? If not, then the researchers have failed — they’ve built an experiment based on an assumption of benefit rather than a quantification of benefit. That’s a dangerous way to “research” because it’s building conclusions based on a potentially false premise (or a potentially true premise) — the problem is that we don’t know. We’re just accepting the premise without debate.

Were the subjects kept isolated during the study, or could herd behavior have also played into the result?