News > Minds at Work > The Secret of Building Successful Teams 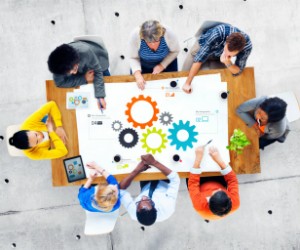 Successful organizations depend on successful teamwork, and according to Arizona State University psychological scientist Nancy J. Cooke what you think you know about teamwork is probably wrong;  creating a high-performing team is about much more than simply trying to recruit the best and the brightest (which research shows can backfire anyway).

For tasks that require a high degree of cognitive complexity, from brain surgery to manufacturing a car, it is impossible for any single individual to completely understand all of the components necessary for the task. Instead, each individual on the team contributes his or her own distinct perspective, knowledge, and skills to the team’s pool of cognitive resources.

“Cognition at the team level is conceived of as a repository of knowledge that the team taps to accomplish a task,” Cooke explains in a new article published in Current Directions in Psychological Science. “This is how team cognition has been traditionally conceptualized.”

The problem with the perspective that drawing on this sort of communal knowledge leads to success is that it isn’t borne out in the real world. There’s an assumption that the shared knowledge within the team remains static across individuals. Taken to the extreme, the idea of shared knowledge would mean that all team members (e.g., a nurse, surgeon, and anesthesiologist) should have the same knowledge, ultimately rendering the team unnecessary, Cooke explains.

“Teams with ideal knowledge but ineffectual interactions will not be effective as a team, yet teams with sketchy knowledge, but effective interactions, may succeed,” Cooke writes.

Having the right knowledge for a task is important, but Cooke’s research shows that cognitive processes – like decision making, planning ahead, and problem solving – are the real keys to successful team performance. Just as individuals use cognitive processes, teams also rely on cognitive processes to accomplish goals. According to a theory called interactive team cognition, teams enact cognition through communication — talking, texting, emailing, or even Skyping — between members.

“In other words, according to the theory of interactive team cognition, a nurse, surgeon, and anesthesiologist may behave as an effective team even with very little shared knowledge, and the effectiveness may wax and wane over the course of the surgery as the cognitive dynamics play out,” Cooke writes.

In studies of interactive team cognition, teams made up of three members – a pilot, photographer, and mission planner – were tasked with an aerial surveillance mission. Each role had access to some unique information and some overlapping information, but in order to take as many useful photos of targets as possible, the team had to communicate efficiently. Performance points were lost for poor or missed photos of targets, the amount of fuel and film used, and varying the mission’s route.

“The data suggest that as teams improve their scores, they are also improving the way they coordinate information passing—or the ‘push and pull’ of information—across team members,” Cooke writes. “In other words, experienced teams provide information to and request information from the right team member at the right time.”

Although each team member increases their knowledge of a task over time, their ability to share that knowledge with others is just as important to the team’s success. Through their interactions, team members coordinate cognitively with each other, integrating their ideas and creating new knowledge, Cooke explains.

Additionally, teams made up of strangers tend to perform worse than teams made up of people who have worked together extensively – regardless of their knowledge of the task. These studies help explain why teams who work together longer tend to have superior performance: Experienced teams know how to provide information to and request information from the right team member at the right time.

In addition to promoting knowledge among employees, organizations may want to focus on ways to build and improve interactions and communication within teams as a way to improve performance.

News > Minds at Work > The Secret of Building Successful Teams