In the wake of recent studies showing the health consequences of prolonged sitting, many professionals have begun standing at their work stations, and even in meetings. New research shows that eschewing a chair has a profound effect on group productivity. 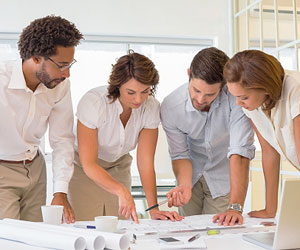 Standing during meetings boosts the excitement around creative group processes and reduces people’s tendency to defend their turf, according to the study.

Behavioral researchers Andrew Knight and Markus Bauer of Washington University wanted to explore the group dynamics that arose in meetings without chairs. They designed an experiment in which participants work in teams for 30 minutes to develop and record a university recruitment video.

The teams worked in rooms that either had chairs arranged around a table or had no chairs at all.

The participants wore small sensors around their wrists to measure “physiological arousal” — the way people’s bodies react when they get excited. When a person’s arousal system becomes activated, sweat glands around the feet and hands release bursts of moisture. The sensors pass a small current of electricity through the skin to measure these moisture bursts.

Knight and Bauer found that the teams who stood exhibited greater physiological arousal than those in the seated arrangement. Members of the standing groups reported that their team members were less protective of their ideas; this reduced territoriality led to more information sharing and higher quality videos.

The findings have just been published in the journal Social Psychological and Personality Science.

Knight says the results show that even small tweaks to physical space can alter the way people work with each other. Removing chairs could be a low-cost way for organizations to redesign an office space while also tackling the health effects of sitting in one place for too long, he says.

News > Minds at Work > Stand Up for Better Meetings