News > Minds at Work > Ready, Set, Type! Touch Typists Are Faster, But Not By Much 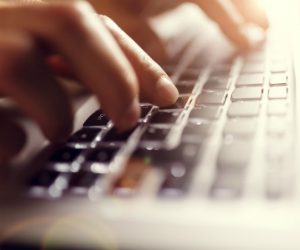 The first typewriter, invented by a newspaper printer and editor named Christopher Sholes in 1868, had a keyboard arranged like piano keys. Initially, the inventors thought that an alphabetical arrangement of 28 letters in a long row would be the most logical, easiest to use layout. However, after some experimentation, Sholes and his collaborators discovered that this arrangement wasn’t so efficient after all. In 1878, Sholes filed a new patent for the keyboard arrangement that most of us now rely for the bulk of our communications: the QWERTY keyboard.

Exactly how Sholes arrived at this arrangement is still a bit of a mystery. Even after the QWERTY layout became the de facto standard, Sholes continued to experiment with alternative layouts that could increase typing efficiency.

New research led by APS Fellow Gordon D. Logan and a team of researchers from Vanderbilt University compared the speed and accuracy of a group of typists who use the standard QWERTY keyboard technique to a group of “nonstandard” typists who relied, to some degree, on a hunting-and-pecking approach. Specifically, Logan and colleagues were interested in finding out how variations in typing style interact with cognitive and motor processes to influence speed and accuracy.

As the researchers point out, we all start off using the hunt-and-peck technique, using our vision rather than our memories to find the right keys. But, after years of practice, our fingers just seem to know which keys to hit all by themselves; our speed and accuracy increase, and we can devote more of our attention to writing instead of the physical process of typing.

Although hunt-and-peck typists may have years of practice, Logan and colleagues hypothesized that these nonstandard typists would still have to rely much more heavily on visual information compared to typists who use standard techniques. Not only might this visual search slow down their typing efficiency, but it’s possible that it might sap cognitive resources away from error detection and composition.

Two groups of typists were recruited: One group of 24 typists self-identified as using the standard QWERTY keyboard finger map, while the group of 24 nonstandard typists said they used another, less conventional, technique. All of the participants said that they grew up with access to computers in their homes, all had formal training in typing, and all but one currently owned a computer.

Typists typed three paragraphs under the three different visual conditions (visible, blank, and covered) while a video camera recorded which fingers were used to hit which keys.

However, when asked to name the letters on a standard QWERTY keyboard, both groups performed surprisingly poorly. Although nonstandard typists spent more time looking at the keys, their memory for letter locations was not any better than their counterparts’. This suggests that both groups “seem able to type without thinking about letters, keys, and movements, having handed that off to the motor system.”

“According to basic psychological laws that govern fine motor skills, the typing style that uses the most fingers consistently should be the fastest and most effective,” Logan said in a press release. “Our study confirmed the theory by determining that touch typists have a definite edge in speed but we also found that nonstandard typists can type almost as quickly and accurately as touch typists as long as they can see the keyboard.”

News > Minds at Work > Ready, Set, Type! Touch Typists Are Faster, But Not By Much