A mobile game series called Beat the Boss is one of the most popular items in the Google and Apple app stores. The games allow users to vent their rage toward their supervisors by engaging in virtual acts of violence against seven “boss” characters. 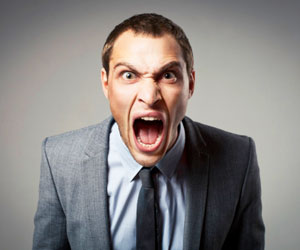 While most workers wouldn’t dare carry out these actions in real life, many have found themselves disciplined or fired because they sought revenge on a mean or exasperating boss outside of the virtual world.

An international team of behavioral scientists, led by Huiwen Lian of Hong Kong University of Science and Technology, recently set out to study the circumstances that lead to such retaliations.

Specifically, the researchers looked at how the interaction of supervisors’ management style and employees’ emotional traits lead to aggression against abusive oversight.

Their overall findings suggest that employees are most likely to lash out at an insufferable boss when they lack self-control and don’t fear punishment for bad behavior.

Lian and her colleagues polled hundreds of workers from a variety of industries, including finance, sales, and education, and asked them to complete online questionnaires. The participants indicated how often their supervisors mistreated them by, say, ridiculing or openly humiliating them.

Participants also explored employee perceptions about two forms of supervisor dominance—the power to reward good behavior with pay raises, promotions, or other incentives, and the power to punish bad behavior with coercive tactics such as demotions or suspensions.

The researchers then assessed respondents’ level of self-restraint by asking them how difficult it was for them to resist temptations. Finally, the participants were asked how often they acted aggressively by, for example, swearing at their supervisors or gossiping about them.

From the responses, Lian’s team was able to piece together the type of dynamic that is most conducive to aggressive retaliation against abusive supervision.  The scientists found that workers were most likely to act aggressively toward a boss when they themselves showed low capacity for self-control and their supervisors refrained from acting punitively. In these cases, employees not only struggled to control their anger, but also lacked the motivation to do so because the consequences seemed benign.

In a second experiment, the scientists recruited another, larger group of people to take the same questionnaire about workplace interactions, but this time also asked questions designed to assess the level of hostile feelings toward supervisors. Again, they found that employees who lacked self-control were more hostile and aggressive toward abusive supervisors whom they perceived as relatively non-punitive.

Reporting on their findings in the Academy of Management Journal, the researchers say the findings show that abusive bosses operate with impunity when they motivate employees by inflicting punishments rather than parsing out rewards. In essence, employees are more likely to retaliate against a supervisor whom they don’t fear.

The researchers suggest that further study on abuse and retaliatory aggression in the workplace, including the negative impact that high self-control might have on work performance and behavior. They also recommend that organizations select people who demonstrate high self-control to supervisory positions.