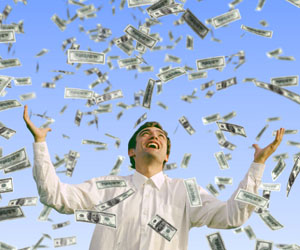 Stock options, gift certificates, and lump sums of cash are the tools of choice that employers use to motivate staff to strive for success. It’s widely assumed that the promise of a monetary bonus improves a worker’s drive, concentration, and performance.

But a new study shows that these motivational rewards may have the opposite effect on some people. In these individuals, the potential for a bonus can send the brain’s reward centers into overdrive and interfere with their ability to process information, a team of American and European researchers has concluded.

The chemical in question is dopamine, a neurotransmitter that plays a variety of roles in the brain. In addition to fueling reward-seeking behavior, it also plays a role in learning, attention, problem-solving, and other cognitive functions, as well as mood and sleep. Certain drugs, such as cocaine, are known to elevate dopamine levels in the brain.  And low dopamine production in the brain is associated with depression, distractibility, and apathy.

Scientists led by Esther Aarts of Radboud University in the Netherlands collected brain-imaging data from volunteer participants, and later asked these recruits to participate in a word task. The participants were signaled that they would get either a high or low monetary reward for correct performance on the exercise.  Each test began with the words LEFT or RIGHT appearing inside arrows on a computer screen.  In some cases, the word corresponded to the direction in which the arrow pointed (e.g., LEFT appearing in a left-pointing arrow.) In other cases, the word was incongruent with the direction indicated by the arrow (e.g. RIGHT appearing in a left-pointing arrow).

Participants were told to press a response button (i.e. a left or right button) matching the meaning of the word in front of them.  Sometimes they were cued on the congruency or incongruency of the target word and arrow. (For example, a red cross signaled that the word and arrow would be incongruent, while a green circle indicated congruency. )  But other times they saw only a question mark as a cue.

The volunteers earned a reward only when they responded correctly and within a time limit.

But the brain images revealed something deeper. When promised a high reward, participants who had measured high on baseline dopamine levels performed well on congruent trials, but comparatively poorly on the incongruency task.  It appeared the participants with a lot of dopamine in their systems were so distracted by the potential reward that they had trouble concentrating on the task.

In reporting on their findings in the journal Psychological Science, Aarts and her colleagues suggest that for people with naturally high dopamine levels, the promise of a bonus for good performance could actually “overdose” the reward centers of their brains.

There’s no way of knowing the dopamine capacity in an employee needing some motivation. But the latest findings suggest that offering a big bonus as an incentive may not generate the best return.

i would think alot of companies would differ in opinion with you. I agree about the cocaine, however with the tests what was the monetary bonus? how much? not sure this is comparing apples to apples. Especially if your making bonuses in $50-100K ranges?

it would be interesting to find out if the sample size was bigger as far as very successful companies.? Interesting read though