The French novelist Victor Hugo wrote that “being good is easy, what is difficult is being just.” A recent study on fairness in the workplace may lend support to his claim. 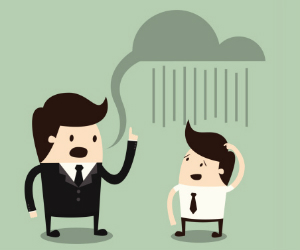 Although fairness is typically heralded as something good, psychological scientists Russell E. Johnson (Michigan State University), Klodiana Lanaj (University of Florida), and Christopher M. Barnes (University of Washington) found that for those charged with enforcing it, workplace justice may actually come at a cost.

Abiding by rules and procedures has been shown to drain mental resources, leading the researchers to hypothesize that enforcing the rules could also be mentally draining. When people’s mental resources are low it’s tougher for them to maintain the self-control needed to resist negative behaviors and behave in positive ways.

“Indeed, companies that encourage procedurally just behavior from their employees in an attempt to create positive work environments may inadvertently (and ironically) create a different set of problems owing to diminished self-control,” they wrote in the Journal of Applied Psychology.

Unlike the closely monitored, rule-bound behavior expected in procedural justice, interpersonal justice largely depends on the social rules of courtesy and respect that people encounter every day. Because mental resources are bolstered when people experience positive social interactions, the researchers expected that managers implementing interpersonal justice would report less depletion of their mental resources.

For the study, a sample of 82 managers were given a daily self-report survey for 10 consecutive work days. The survey questions on justice behavior, positive work behavior, and mental depletion were adapted from previously validated scales to ensure the effectiveness of the survey.

As expected, people who engaged in more frequent procedural justice behaviors–such as suppressing personal bias in making decisions–experienced a greater degree of mental depletion. The day after carrying out procedural justice managers were more likely to report that they had trouble focusing and concentrating.

“In contrast to previous research focusing solely on the beneficial effects of justice, our results indicate that procedural justice behaviors—which entail navigating potentially complex issues in a manner that suppresses the potential biasing effects of self-interest and favoritism toward ingroup members—is draining, leaving employees with fewer available resources,” the researchers state.

Procedural justice behaviors also resulted in decreases in positive behavior. When participants were mentally depleted they were less likely engage in “above-and-beyond” positive behaviors at work, like giving co-workers encouragement or voicing appreciation.

News > Minds at Work > For Managers, Upholding Fairness Comes at a Cost