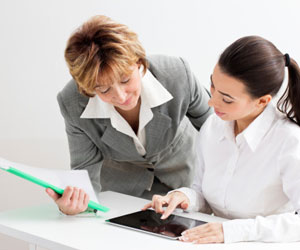 Mentoring a less experienced colleague — and doing it effectively — can be a demanding task, especially when deadlines are looming. The relationship is a delicate one, and trying to foster a working dynamic that is productive but also engaging is a skill that requires practice.

New findings suggest that how your company operates as a whole can have significant bearing on whether the mentor/protégé bond flourishes or flounders. That is, the overall tenor of the workplace environment influences the give and take of the relationship.

In investigating this topic, Changya Hu of the National Chengchi University in Taiwan realized that perceived organizational support (POS) — the belief that an organization is looking out for employees’ well-being — is intimately involved in the mentor/protégé relationship. They hypothesized that mentors who felt more connected with their company — as indicated by high POS reports — would pass on the favor by being good mentors. By the same token, protégés would feel more connected with their company because of that boosted mentoring. Moreover, the researchers predicted that the mentors’ intrinsic level of altruism would have a significant bearing on these trends — an ability to tip the scales toward increased protégé POS.

Hu and colleagues sent out questionnaires to 268 mentor/protégé pairs in industries ranging from finance and information technology to the service sector and manufacturing. Protégés were asked about their perceived level of support from their mentor, whereas questions for the mentor probed their level of altruism. Both mentors and mentees were asked about their POS from their company overall.

In line with their predictions, the researchers found that mentors’ POS was positively related to their mentoring ability: the more connected mentors felt with their company, the better they were at mentoring. And the relationship between mentor POS and successful mentoring was partly accounted for by mentor altruism: higher altruism predicted more involved and effective mentoring.

Mentors’ perceived support from their company seems to be most critical for those that generally exhibit low altruism — that is, high POS can still produce a good mentor for someone who wouldn’t normally give their time to a budding protégé.

But the researchers explain that mentors low in altruism and who also have low POS are unlikely to take on the extra burden of mentoring a protégé.

“Mentors are more likely to provide effective mentoring to their protégés when they believe that the organization truly cares about employees’ development and well-being,” the researchers write in an article published in the Journal of Organizational Behavior. “That is, mentoring must occur in an environment in which mentors feel that the organization supports and values its employees.”

To improve productivity and well-being overall, organizations need to take a more systematic approach to mentoring. According to the researchers, a strong “mentoring climate” should be a critical component of basic human resources practices.