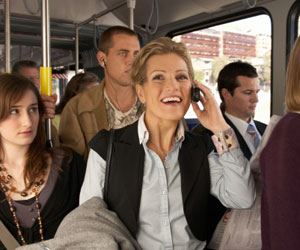 Last month the US Federal Communications Commission announced that it may allow airlines to experiment with permitting passengers to use cell phones during flights. That’s good news if you need to make some business calls during a long trip. The downside is that you’ll have to listen to other passengers gab away on their own handhelds — something you already endure if you commute on a train or bus to work.

But aren’t conversations between two of your fellow passengers just as distracting or annoying? And what about the screaming baby in the row behind you?

Actually, recent research shows that cell phone conversations represent a special kind of disruption when you’re trying to catch up on work during a long flight.

Psychological researcher Lauren Emberson, with the help of leading cognitive psychologists, proposed that our attention is interrupted at different levels, depending on the type of speech that we’re hearing.

“Overhearing someone on a cell phone means hearing only half of an ongoing conversation — a ‘halfalogue,’ Emberson and her collaborators wrote in a report published in the journal Psychological Science.  And the unpredictability of those conversations places particularly strong demands on our attentional resources, they said.

When you’re listening to just a conversation, your brain starts trying to predict what that person is going to say next, Emberson explained.  However, when you only hear one half of a conversation, as you would when hearing someone next to you talking on a cell phone, this conversation is more unpredictable than hearing both halves. You get less information that your brain can use, and this greater unpredictability attracts more attention from your cognitive systems.

To test out this phenomenon, Emberson and her team assigned study participants to sit at a computer and complete two tasks. One involved tracking a moving dot with the computer mouse, and the other involved responding to letters presented on the computer screen. They were told to complete these tasks a number of times, and would sometimes hear speech from the two computer speakers situated on each side of the monitor.  They would randomly hear a two-way conversation, a halfalogue, a monologue, or complete silence. At the end of the session, the participants filled out a post-test questionnaire.

They repeated the experiment with another group of participants, but this time manipulated the speech so that it was audible but incomprehensible, similar to hearing someone speak under water. But unlike the first study, the participants showed no attention deficits on the task when they heard the muffled halfalogues. This suggests you won’t be distracted if you’re hearing a halfalogue by someone speaking too softly to hear, or in a foreign language.

The FCC isn’t planning to require airlines to try out cell phone permissibility.  But if you’re taking a business flight and need to work en route, you might want to check ahead of time to see which airline has decided against taking the commission up on its offer.

News > Minds for Business > Cell Phones on Planes? Forget About Getting Work Done

How to Tune Out Office Distractions

Multiple mechanisms contribute to our ability to tune out distractions in the workplace. More