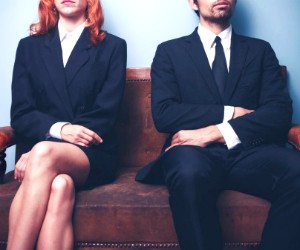 Job applicants who disclose their status as cancer survivors may be less likely to get a job offer, according to new research.

“Managers and employees should be mindful of the fact that although societal attitudes toward cancer survivors are generally quite positive, with people often viewing them as champions who have successfully overcome a traumatic experience, we nonetheless might perceive them as being less desirable employees simply because of their history with cancer,” said lead author Larry Martinez, assistant professor of hospitality management at Pennsylvania State University.

Previous research has shown that people often express paternalistic attitudes towards cancer survivors— assuming, for example, that they are less capable of working after recovery.

Findings like this suggest that disclosing a cancer diagnosis may lead to subtle forms of discrimination, such as lower perceptions of competence.

“This study is based on this idea that Mikki has been working on for a while now,” Martinez said in a press release. “Basically, people are more likely to discriminate in very subtle interpersonal ways. There’s less eye contact. There are shorter interaction times when speaking with managers. There are more negative interpersonal behaviors from managers, like frowning, brow furrowing and less smiling — fewer cues that communicate to applicants that they are interested in hiring them for the job.”

In a field study, Martinez and Hebl had five research confederates (two male and three female) attempt to apply for retail jobs at over 100 different retail stores. The researchers confirmed that each store was currently hiring and excluded any potential research sites that relied on online-only applications.

Confederates were randomly assigned to either an experimental condition—in which they disclosed a cancer survivor status—or to a control condition. All confederates received extensive training to standardize their interactions with the hiring manager: They were trained to ask hiring managers a specific set of simple questions about whether they could have an application and when they might hear back about the job.

For each study trial, the confederate came into the store and presented a standardized resume to the hiring manager. In the experimental condition, the “applicant” walked into the store wearing a hat that had “Cancer Survivor” on the front. Their resume included a note: “There is a gap in my employment because I was diagnosed and treated for cancer. I have been in remission for one year.” In the control condition, the resume provided no extra information and participants wore a plain white hat.  Confederates were blind to which condition they were assigned to.

Afterwards, the confederate evaluated their interaction with the manager based on interpersonal behaviors including, eye contact, smiling, hostility, and rudeness.

While Martinez and Hebl point out that no hiring laws were broken, they found evidence of discrimination: Those disclosing a history of cancer received worse interpersonal treatment and fewer callbacks, despite the fact that applicant qualifications and behaviors were standardized. In the cancer survivor group, 21 percent received callbacks, compared to nearly 37 percent for those in the control group.

“This lower rate of callbacks is evidence of systematic exclusion based on history of cancer, which can leave employers at risk of biased selection decisions and potential litigation,” the researchers explain. “Given that these individuals may feel compelled to disclose in selection or other workplace contexts, it is important for leaders within organizations to be prepared to handle such disclosures.”