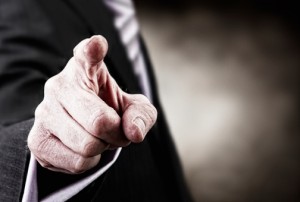 It seems self-evident that abusive supervision encourages deviant behavior among subordinates. Boss yells at employee, and employee can’t shout back without the risk of getting fired or suspended. So employee vents anger and frustration on the organization — stealing company property or abusing an expense account.

But could it be that such deviant behaviors are what cause bosses to treat employees abusively, rather than the other way around? A newly published behavioral study suggests that possibility.

An international team of researchers theorized that abusive supervision will lead to organizational deviance, and vice versa. The team’s data came from 150 survey responses involving people from a variety of occupations and industries.

On two occasions, 20 months apart, the participants provided information on the type of treatment they received from their bosses and the frequency with which they deviated from organizational policies or norms.

In analyzing the results, the researchers, led by Huiwen Lian of The Hong Kong University of Science and Technology, found no clear evidence that abusive supervision led to organizational deviance over a 20-month time frame. But the findings did suggest an opposite effect. That is, subordinate misbehavior appeared to result in abusive supervision later on.

Surprised by their findings, Lian and her colleagues conducted a second study to see if they could find reasons for this effect.  This time, they surveyed 125 people on two occasions, but only 6 months apart instead of 20. The participants responded to the same questions used in the prior experiment, but also rated themselves on their self-control abilities and their intentions to quit their jobs.

Lian and colleagues say their findings run counter to previous studies that are built on the assumption that supervisors who act abusively cause subordinates to react with deviant behavior.

“Although this assumption often leads us to blame supervisors for abusing their power,” they write in The Journal of Applied Psychology, “our findings suggest that supervisors use abusive behaviors in reaction to deviant subordinate behaviors, perhaps to correct them.”

The researchers caution against the assumption that such workplace turmoil is the fault of one party, rather than a relational issue. But the findings, they say, signal that organizations should educate managers and subordinates about the vicious cycle that results from abusive supervision and employee misbehavior.

Not only can abuse not be justified, what about abusive supervisors that are abusing people low in deviant behavior? Why do so many articles justify abuse and put the burden on the employee to fix the issue? When you’re working a job with a crippling workload, having to document everything your abusive boss does becomes a full-time job itself.

The newly elected members include 59 women, the most in a single year, and 30 international members. More

Psychological scientists looking to apply for funding from the US National Science Foundation may be interested in upcoming 2021 deadlines. More