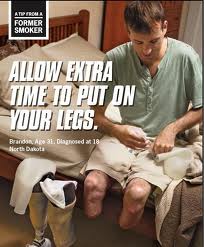 While watching TV this weekend, I happened on a gruesomely powerful anti-smoking advertisement. It featured former smokers who were missing body parts—a woman with missing fingers and a handsome young man with two prosthetic devices where his lower legs used to be. Both talked matter-of-factly about their permanent disabilities, which were direct consequences of their long-time cigarette habits.

This ad is part of a new, $54 million campaign by the U.S. Centers for Disease Control, the most ambitious and starkest anti-tobacco campaign ever undertaken by the government. Other ads in the campaign show ex-smokers who have had their larynx removed, or a jaw or a lung. The ads are running on radio, in print and on billboards as well, where federal health officials hope to shock smokers into quitting the cigarette habit.

Will these scare tactics work? Will shock and disgust accomplish what taxes and outright bans and years of cajoling have failed to do? The government is hoping that these attention-grabbing ads will persuade as many as 50,000 smokers to give up their debilitating habit, but it’s clearly a gamble. I found this message very powerful, and if I were a smoker I think I would be motivated to quit. But would I really, and am I typical? Might others react to these upsetting ads differently, with cynicism or annoyance or arrogance, and just keep puffing?

The fact is, it’s very difficult to know which persuasive messages work, and which do not. People are not very good at knowing and reporting their own state of mind, and even worse at predicting their own behavior, much less the behavior of others. As a result, focus groups and other such strategies are notoriously unreliable predictors of what works in the real world. Wouldn’t it be helpful to have a simple, objective assessment of anti-tobacco messages, one that predicts how large numbers of people will respond?

Well, psychological scientists are working on just that, and indeed may have identified a neurological predictor of mass behavior change. Three researchers—Emily Falk of the University of Michigan, Elliot Berkman of the University of Oregon, and Matthew Lieberman of UCLA—have been conducting scans of smokers’ brains as they watch actual public health ads aimed to deter smokers. They wanted to know: Does brain activity of a small group of smokers, while watching anti-smoking ads, foretell the overall effectiveness of the ads in changing the deadly behavior of America smokers?

To answer this question, the scientists recruited men and women, age 28 to 69, who were heavy smokers with a strong intention to quit. All the volunteers viewed professionally made TV ads that were designed to help smokers quit. They watched ten ads in all, representing three different ad campaigns, while their brains were scanned with an fMRI. The scientists were particularly interested in the neuronal firing in a brain region highly associated with individual behavioral change.

They also asked the same volunteers to react to the ads. Is this one powerful? Is it believable? Persuasive? They ranked the three campaigns in order of effectiveness. The ads, which were subsequently run in large TV markets, all ended with a display of the phone number for the National Cancer Institute’s Quit-line. The idea was to see if the volunteers’ opinions of the ads—a regular focus group in essence—or their brain activity—a “neural focus group”—was a better predictor of population-wide change, as measured by the jump in the number of calls to the Quit-line after the ads aired.

The results were encouraging. As reported on-line in the journal Psychological Science, neuronal activity in the targeted brain region did indeed predict the real-world success of the ad campaigns for a large population of smokers. Activity in other brain regions did not, nor did the volunteers’ own opinions of the ads. When asked to rank campaigns in order of persuasiveness, the volunteers as a group ranked them in the same order as industry experts ranked them. But the brain told a different story: The neural focus group basically flipped the order, into one more predictive of the three campaigns’ relative success. In other words, the brain scans seem to have tapped into a reaction that is deeper and more useful than conscious thoughts and judgments.

This scientific report does not describe the three ad campaigns in detail, so it’s not clear if any of the ads used the shock tactics of the government’s current effort. But the findings do raise the hope that public health officials will be able to tailor future ads more effectively, giving them better tools to target not just smoking, but all the disorders of behavior, from obesity to drug and alcohol abuse. The Quit-line number is: 1-800-QUIT-NOW.