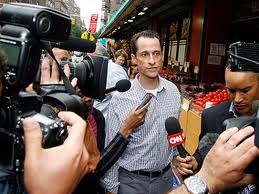 Aren’t we supposed to admire Rep. Anthony Weiner’s persevering spirit in the face of adversity? Lesser men would be crawling under a rock with such revelations about their personal frailties and sexual oddities. The American tradition, from Ben Franklin to Horatio Alger to Rocky Balboa, is to value grit and determination.

The fact is, it’s hard to cheer for giving up, throwing in the towel. So it’s no wonder this never-say-die attitude has made such an appealing plot line for dime novels and Hollywood. But is it really good psychology? Or might there be times when it really is better to simply walk away?

Psychological scientists have explored this question, and more specifically a possible link between tenacity and both physical and mental health. It would seem on the face of it that persistence would be tonic over the long haul; hanging tough should increase the odds that you’ll succeed, and personal success is closely linked to well-being. But what if the goal is extremely unlikely? Like an infertile couple conceiving a child? Or an average high-school sprinter becoming an Olympic gold-medalist? Or a beleaguered lawmaker bucking the entire Democratic leadership? Is there a point of diminishing returns, beyond which determination takes a health toll? Or put another way: When does an admirable trait like perseverance start to look more like beating your head against the wall?

To test this in the laboratory, psychologists Gregory Miller and Carsten Wrosch developed a psychological instrument that can reliably distinguish between people who are relentless by nature and those who are much more accepting of life’s curveballs. For simplicity, let’s call them the Bulldogs and the Quitters. In a series of experiments, the psychologists exhaustively studied these two personality types to see how healthy and well adjusted they are.

And the answer is plain: Quitters are healthier than Bulldogs by almost every measure. For example, in one study the psychologists looked at everything from indigestion and diarrhea to skin disorders, poor sleep and headaches. Quitters suffered less than Bulldogs across the full range of maladies. Further, the Bulldogs’ stress hormones were much more likely to be out of whack, indicating that they are in a state of chronic stress. In one study published in the journal Psychological Science a while back, scientists followed adolescent volunteers for a full year. Over that time the Quitters had much lower levels of a protein called CRP, an indicator of bodily inflammation. Inflammation has recently been linked to several serious diseases, including diabetes and heart disease, suggesting that healthy but tenacious teens may already be on the road toward chronic illness later in life.

But knowing when to throw in the towel is only half the story. The psychologists also sorted both the Bulldogs and the Quitters by their willingness to re-engage and set new goals after they gave up on something important. While they did not find a direct link between re-engagement and physical health, they did find that people who readily jumped back into life had a greater sense of purpose and mastery and were less likely to ruminate about the past. Setting new goals appears to buffer the emotional consequences of failure, especially for those, like the Bulldogs, who have the hardest time admitting defeat.

So what is it that makes the most tenacious Bulldogs finally say, OK, I’ve had it? Paradoxically, it appears that the pathway to health may be through melancholy. Think of it this way: People who simply will not or cannot give up an impossible dream eventually get emotionally defeated by their Sisyphean task. Some get clinically depressed, but many others just shut down; they become pessimistic, passive, physically and mentally depleted. This dysphoria is what allows them—forces them really—to stop and reassess. It’s said that depressed people have a more realistic view of the world, and in fact some evolutionary psychologists now believe that depression may have had survival value when we were evolving on the savannahs. Depression is what told our bodies to slow down and take stock of the situation, be cautious, don’t dis the silverback. Today a little melancholy might help us give up on that Olympic gold, and in the long run avoid killers like diabetes and heart disease.

It’s important to strive. Setting lofty goals, and then scaling them back, is the crux of forging an identity in the world. As people age they are forced to make tradeoffs, to abandon dreams of an illustrious career or the picture-perfect marriage. We all abandon life goals. The only question is whether we make our life adjustments with grace and good timing. The misanthropic comedian W.C. Fields anticipated much of this science when he cleverly revised that 19th-century maxim about perseverance: “If at first you don’t succeed, try, try again,” he said. “Then quit. There’s no point in being a damn fool about it.”

Wray Herbert’s book, On Second Thought, is about irrational thinking. Excerpts from his two blogs—“Full Frontal Psychology” and “We’re Only Human”—appear regularly in The Huffington Post and Scientific American Mind.

News > Full Frontal Psychology > The Psychology of Throwing in the Towel

The Minds of Medalists

Psychological scientists have identified what distinguishes the athletes that made it to Winter Olympics, and what predicts their chances of standing on the medal podium. More

The 6th International Self-Determination Theory (SDT) Conference will take place from June 2–5, 2016, in Victoria, British Columbia, Canada, with poster submissions being accepted until February 1. Thefirst day (June 2) will start with a welcoming ceremony and Recognition of Presence on Coast Salish Territory, followed by presentations by SDT More

Mood and Experience: Life Comes At You

Living through weddings or divorces, job losses and children’s triumphs, we sometimes feel better and sometimes feel worse. But, psychologists observe, we tend to drift back to a “set point”—a stable resting point, or baseline, in the mind’s level of contentment or unease. Research has shown that the set points More