News > Full Frontal Psychology > The Poor and the Heartless 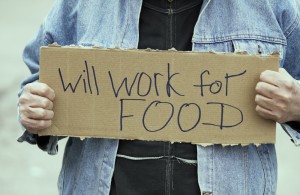 Last year, the top 10 percent of American earners took home more than half of the country’s total income. The top 1 percent took home a fifth. That’s the greatest income disparity ever recorded, and it’s getting worse. Indeed, the income of the wealthiest has grown dramatically during the recession that began in 2008, while the less fortunate have seen their incomes stagnate.

This inequality has all sorts of consequences for the poor, besides the obvious financial burden of everyday living. As Maia Szalavitz reported in Time magazine this week, the poor also suffer from poorer health and higher mortality. And now it appears that income inequality may actually affect people’s character as well, creating a class of harsh, moralistic citizens who are all too ready to judge one another. Surprisingly, these strict and punitive moralists are not the rich. They are the poorest of the have-nots.

That’s the main finding of a new study from psychological scientists Stefan Thau of INSEAD, in Singapore, and Marko Pitesa of Grenoble Ecole de Management, in France. Thau and Pitesa had the idea that the poor, because they feel more vulnerable to wrongdoing, react to this generalized fear by preemptively attacking anyone who threatens the social order. Feeling like victims and lacking the protection that money offers, they use punitive judgments as their defense against society’s ruthlessness. The scientists tested this idea with both a survey and an experiment.

The cross-cultural survey used data from the World Values Survey, a global project that has sampled people from almost 100 countries since 1981. For this study, the scientists gathered more than 18,000 responses from 56 countries. In addition to household income, the scientists also gathered information on inflation, reasoning that the poor would be more threatened by erosion of their scant resources. They examined the harshness of subjects’ moral judgments on a range of behaviors, from lying to cheating on taxes. They crunched these data together, controlling for education, job status, social class, religion and race.

The results supported their main idea. Both lower income and greater inflation were linked to tougher moral judgments, and these effects compounded each other. Importantly, inflation affected moral judgment only in those who were relatively poor, and not at all in above average earners. It appears the poor, already vulnerable, feel even more vulnerable when inflation eats away at their threadbare cushion.

Thau and Pitesa wanted to rule out the possibility that being poor simply makes people negative in general. So they ran an experiment in which they manipulated subjects’ sense of financial status, making some feel relatively poor and others relatively well off. Then they asked them about their feelings of vulnerability and their ability to cope with challenges. Finally they had them judge offenses of two kinds. Some were harmful—unprovoked acts of aggression, for example. The others were offenses against purity—public swearing, for example. The scientists expected that income would only influence judgments of harmful offenses, the ones with clear victims, because only these offenses are personally threatening.

And that’s what they found, and report in a forthcoming article in the journal Psychological Science.  Those lacking financial resources were much harsher in their judgments of harmful transgressions, but not harsher—in fact a little less harsh—in judgments of victimless crimes. What’s more, the findings showed clearly that being poor made people feel more vulnerable to life’s slings and arrows, and that this sense of vulnerability is what in turn led to rigid, moralistic judgments of others. Today’s historic distortion of income, it seems, is creating an underclass defined not only by deprivation, but by pervasive fear and meanness of spirit.

News > Full Frontal Psychology > The Poor and the Heartless